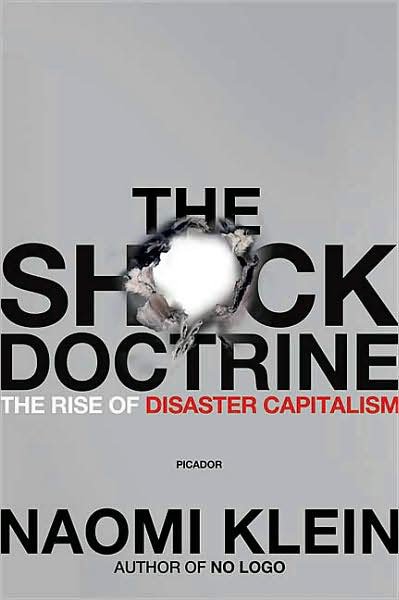 "The Shock Doctrine: The Rise of Disaster Capitalism" (Picador USA, 2008, $16), is so well written and researched that you will find it as difficult to put down as anything by your favorite fiction writer.

But this is no fiction. Award-winning journalist and author Naomi Klein has done something both miraculous andfor the powers that bedangerous: Miraculous because it is a book about economics that readers will not only understand but also find engrossing; dangerous for exactly the same reason.

Klein exposeswith razor-sharp investigative reportingthe damage done by the fundamentalist economic theories of Nobel Prize winner Milton Friedman, who said: "Only a crises actual or perceived produces real change." Known collectively as free-market capitalism, Friedmanism, neoconservativism or "corporatism," those theories have not only been responsible for millions of deaths across the globe, she writes, but also ensure that the U.S. will never again be without a war.

"It is a fairytale history, scrubbed clean of the violence so intimately entwined with this crusade," she writes of the accolades heaped on Friedman. Rather, she says, Friedmanism is "a variation on Machiavelli's advice that 'injuries' should be inflicted 'all at once.Ҕ

In the book's opening chapters, Klein writes about experiments, which Canadian psychiatrist Dr. Ewen Cameron conducted in the 1950s, to wipe the mind's slate clean so that "healthier" thinking could be substituted. Those CIA-funded experiments (a well-documented fact) primarily employed electro-shock therapy along with isolation, and other mind-altering "treatments."

Completely ineffective as therapy, the methods proved extremely effective as torture: By shocking the subject into fear, complacency and complete disorientation, torturers can force detainees into accusing their mothers (or country) of vile crimes "just to stop the pain." The end result is not extraction of information, but compliance.

Economically, Klein shows that Friedman and his disciples, the "Chicago Boys," recognized that shocking eventsmilitary coups, enemy attacks, hyperinflation and natural disasterscan so disorient people that they are willing to accept changes they would normally find intolerable. Capitalists should be ready, Friedman says, to exploit and manipulate shock by quickly injecting sweeping policy changes. Disasters, in the Friedman book of economic fundamentalism, are merely capitalist opportunities.

In example after example, Klein drives that point homeand the collective human liability of Friedmanites. Although stemming from democratic government, corporatism does not require democracy; the system positively blooms under despots, unconcerned with the cost in human life. In Chile, Friedman personally played a pivotal role in Pinochet's rise to power, and thousands fell into poverty. It surfaced in China after the Tiananmen Square massacre, and in Boris Yeltsin's Russia, with enormous human tolls. Democracies certainly aren't immune, though. Corporatism devastated populations in Sri Lanka after the 2004 tsunami, in Iraq after the U.S. invasion and on the post-Katrina Gulf Coast.

Imposed through three driving rulesprivatization, elimination of government social programs and smashing trade unionsדpure" free-market capitalism allows the market to balance itself, without the "interference" of government, according to Friedman, which should only exist to expand the free market. But corporations, as they have demonstrated over and over, have no conscience; their mandate is profit, and they must have constant growth to provide shareholder equity.

Friedman's theories have even subverted the roles of the World Bank and the International Monetary Fund, organizations whose charters mandate righting the economic circumstances that made Germany ripe for Nazism in the '30s, for example: punitive restrictions causing hyperinflation, joblessness and eventually, World War II. Today, a country in the throes of economic upheaval must slash its social programs and sell off its assets to receive aid, often plunging millions into devastating poverty, malnutrition and death.

Friedman's theories have influenced U.S. economic policy since the Reagan era, one-by-one overturning the social Keynesian economics introduced during the Great Depression. Through privatization, many of the social functions once managed by the governmentschools, prisons, armaments and armed forces logistical support, and vital infrastructure components (post office, transportation, utilities and so forth)are now completely or partially privatized. Homeland security, which one could expect to be an over-riding governmental obligation, is today's premiere private growth industry, and the Iraq War, which costs American taxpayers billions every month, is the most privatized war in history.

If one's market is "security," one must have an enemy to secure against, "actual or perceived." In the corporatist realm, security companies must create a conflict if none exists. It is no accident that Halliburton has received billions in non-bid, cost-plus contracts since Sept. 11. And corporate elite, despite clear conflicts of interest, hold (or held) key posts in the Bush administration. In another time and place, we would call them war profiteers.

Despite what Friedmanism has inflicted on the world, Klein's closing chapters present a message of hope. "Markets need not be fundamentalist," she writes.

A New York Times bestseller, "Shock Doctrine" has been translated into 23 languages at this writing. Find more info at The Shock Doctrine.

I gotta buy and read this, too. Sounds surreal, though!

Walt, surreal is an excellent description. This book is scary, mostly because it makes such good sense. You might not agree with all of Klein's conclusions (I'm not sure I do), but it will probably put a lot of events into a context other than: "Are they nuts?" It did for me.

I haven't read the book but your review, Ronni, makes it sound like a must read. While I am not ready to condemn free-market advocates (well, not all of them, anyway), I think the belief in free-markets has taken on a utopian fervor of the kind of that communists and facists used to have, and it lacks a balanced appraisal of how disruptive free markets and western-style democracy can be. A market based economy is by necessity and design an opportunistic economy, giving those with more capital and/or more aggression more advantages. Look at Kashmir, a paradise that was once the peaceful home to Buddhists, Hindus, and Muslims. In the last 60 years it has known so much violence and it grows worse every year instead of better. Religion and ethnic identities are the survival mechanisms that are pushing back against the uncertainties of modern political organization and the market. We in the West seem to think that if every one can just participate in the world economy, vote for their corrupt leaders, get a job, a car, and house then everyone will be happy. Utopia is a bit more elusive than that I fear. I think it takes a lot more work than just the invisible hand that Adam Smith described. Inner work and community work are also needed. While I believe in the power of economic success to lift people up materially, capitalism motivated solely by self-interest will surely cause some harm.

This looks to be an amazingly educational read. Some have another phrase for it - Problem - Reaction - Solution. Government and business have employed such tactics for ages.

Another altruist on a campaign. Mostly opinion presented as fact. Not on my list.

How do you know if you haven't read it, Striker? Actually, Naomi Klein has an impressive track record with reporting facts.

@ladd, I wasn't going to bother answering this, but a 2nd nuisance e told me "enuf"! So I've unchecked the Notify box. Reading the review, under a misleading header, was quit enough to know full well what her campaign is about. The two paragraphs beginning "Friedman..." would alert most anyone. If that's representative of Naomi's track record, such suffices. A better and honest and moral read would be anything by Ayn Rand.

I have no idea what your first sentence is supposed to mean, but no matter. Otherwise, it seems like you're pissed that Ms. Klein would dare criticize Milton Friedman's flawed economic theories. You know, I assume, that she's not the only one. The evidence is everywhere you look on that one, so you'll need to find yourself a better straw man to beat up. And the truth is, I doubt anywhere cares whether *you* are interested in these kinds of facts, or not. After all, you are apparently a Randoid, and there is little sillier than that in today's world. So I'll leave this one here. Your motives in knocking down Klein's book without reading it is clear.

Michael, Problem, reaction, solution is one thing; problems redefined as capitalist opportunities, solved by tearing out the guts of the very systems that could assist those affected by the problem/disaster is quite different. Striker, your comments, given that you haven't bothered to actually read the book, are simply inane. First, you attack Klein as an altruist, which Webster's defines as: "unselfish regard for or devotion to the welfare of others." Although, having read her book, I do not agree that this is Klein's motivation, how is that a bad thing to be? Then you attack Klein for daring to define and state the results of Friedman's failed theories (she's not alone, by the way, if you bother to read at all), again, without ever bothering to read the book, which is stuffed full of facts. Yours is the most disingenuous, dishonest and lazy kind of review--attack the review instead of the source. Read the book. Learn something new.

I bought the book Ronni. I haven't read it yet though.

I read everything from Zinn and Chomsky to George Will and Will Buckley. It doesn't mean I agree with all of it, but you cannot put forth a valid opinion about someone until you are familiar with their work. If you do not challenge your own beliefs then you have no interest in truth.