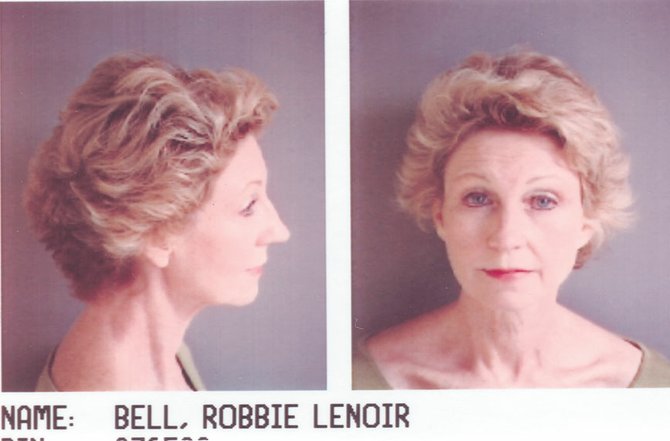 Robbie Bell, indicted as an accessory after the fact in the murder of Heather Spencer, says Spencer was already dead when she got there. She does not say how long she was in the house with Spencer after the attack. Photo by Courtesy Hinds County Sheriff Department

Robbie Bell says she was not home on Trawick Drive when her son, George Bell III, raped and then bludgeoned Mary Heather Spencer with a flashlight the night of Sept. 10, 2007. So says her response to Linda Francomb's lawsuit, which Bell's attorney, C. Maison Heidelberg, filed in Hinds County Circuit Court July 23.

"Robbie Bell was not present at the time of the violent acts of George Bell, III nor was she aware of the acts until after the fact," the document states. She was "later informed by George Bell, III that he had killed Heather."

The Bell response does not specify when Robbie Bell came home that evening, or how long she was in the same house with Spencer after the attack. Nor does the Francomb suit state when Spencer died.

The Francomb suit alleges that Robbie Bell knew that her son had "severe personal and emotional problems  substance abuse disorders and addictions, and violent tendencies toward females," and that Robbie Bell was aware of his drug use when he returned from rehab.

"George Bell, III was under the influence of mind-altering drugs at the time," the response states, " [and was] a threat to his own mother and to himself," because he was also armed. "George Bell, III refused repeated requests to cease drug use and turn himself into [sic] authorities." But the response denies that Robbie Bell was responsible for George Bell III's actions, stating she "had no legal duty to control or prevent the acts of an adult ... ."

In response to Jackson Free Press inquires, Heidelberg provided the following statement via e-mail on behalf his client: "Shock, grief and loss have devastated both families. Robbie understands the range of raw emotions felt by many who have been affected by this tragedy, including friends and even the community, as she also suffers from these feelings.

"As to the filing of this civil lawsuit and the questions asked by the media, we do not believe it is appropriate or productive to comment. The proper venue for questions and presentation of facts is through the courts, and we will respect and follow that process."

Police arrested George Bell III Sept. 11, 2007, after a four-hour standoff in a Northside Drive gas station. Robbie Bell was also there; questions remain as to whether she was his hostage or simply a passenger.

George Bell pleaded guilty Feb. 4, 2008, to capital murder and kidnapping, and was sentenced to life in prison without the possibility of parole. He had been high on cocaine the night he murdered Spencer, and said he barely remembered the events.

"You'd have to prove that (Robbie Bell) concealed (George Bell III), under to the statute, or otherwise assisted him with the intent to enable him to escape or avoid arrest," said Matt Steffey, a law professor at Mississippi College. "I can understand why there might not be any good evidence that she took any actions to help him." Robbie Bell's failure to help Spencereven if Spencer was alive after the attackis not a crime, Steffey said, and does not constitute accessory after the fact. Otherwise, he said, we would all have to stop at the site of every auto accident to render aid.

It could, however, be negligence. "A civil lawsuit has a lower burden of proof," Steffey said. "It's more likely than not that she committed a tort," by not giving or calling for aid, although it could be difficult to prove.

George Bell III could have been sentenced to death for his crimes, but Spencer's family petitioned for life without parole. "We think the death penalty is too easy for him," Francomb told WLBT after Bell's confession. "We'd rather him spend the rest of his life with the memory of what he did to Heather."

"I hope it torments him forever."

Eric Stracener, Francomb's attorney, would not comment for this story. The attorney general's office and Robert S. Smith did not return calls.

Good luck to the Spencers. I hate having to trust Lawyers, however. I hope they win this one.

Lawyers are sometimes good, Iron. We wrote the constitution, frequently interpret and abuse it, keep people out of jail, et al. So what if we steal, lie and cheat. All capitalists do this too. It's the Capitalistic and American way. Everybody hates us lawyers Iron until wronged or aggrieved or those jail cells start to calling. Then everybody calls us - the Cellbusters and Righters of Wrongs.

Don't try to get noble on me, Walt. Lawyers also allow murders to walk free, and harass normal citizens in civil courts. I just hope the Spencers have some success.

What kills me about this is that, regardless of whether she is telling the truth or not, Bell does not seem to deny that she was in the home after her son brutally killed Spencer, and presumably without calling the police or an ambulance. It is shocking to the senses to hear the law professor say that isn't criminal; it rather reminds me of thing that Melton has done that people claim not to be illegal. It's easy to forget that people have to be charged with what the law specifically forbids. But if her account is true—and we have no way at this stage of knowing whether it is or not; witnesses have been instructed not to talk to media about that night—maybe the civil route will be more conducive to justice for the Spencers. The whole thing disgusts me. Whatever the truth is, what a fall for a woman who presented herself as so perfect. I know she was his mother, but I can see no friggin' excuse on the planet for not calling the police or an ambulance if she knew what had happened. Humanity should trump blood at some point. Shudder.

WLBT reported yesterday that George Bell has been moved from Parchman to a private prison in Wilkerson County. Anyone know anything about that prison? We need to figure out if he is getting a cushy deal. It is simply remarkable to see how differently criminals with money (and/or white skin) can get treated. (Will the governor's mansion be next, putting him in line for a pardon like all those other domestic-abuse murderers Barbour is letting go!?!)

Interesting. Most private prisons that I know about are for either medium or minimum security prisoners. I wasn't aware that people convicted of capital murder could be held at one. I have no problem with private prisons for non-violent types. Housing convicted murderers, however, is completely different.

I've never even heard of a "private" prison. Hmmm... sounds even like an oxymoron.

If you go to MDOC's web page and look under institutions you will see private, regional and state prisons, I think. It's not unusual for inmates to be moved from Parchman to private prisons. There aren't any discernable differences in the treatment. No upgrading is involvesd technically although most people consider Parchman the worse.