JSU's Jaymar Johnson Goes In Sixth Round of Draft 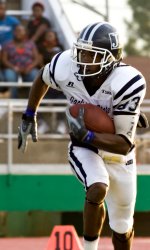 The Associated Press is reporting that the Minnesota Vikings chose Jackson State University receiver Jaymar Johnson in the sixth round of the NFL draft today. The No. 198rd pick overall, Johnson is the first player from a Mississippi college to be drafted in the 2008 NFL draft and the first JSU player to be drafted since 2000.