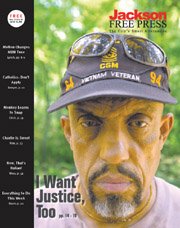 Following are links to the Jackson Free Press' full, and ongoing, package of stories about 1960s Klan activity in the Natchez-Meadville-Roxie, Miss., area, starting with the award-winning investigative story by Donna Ladd and a team of young Mississippians, working with David Ridgen, a documentary filmmaker from the Canadian Broadcasting Corp., to chronicle Thomas' Moore's 2005 return to Mississippi to seek justice for his brother's murder.

In the first story, the Jackson Free Press first reported the news that both of the main Klan suspects are still alive in the Natchez area—although The Clarion-Ledger and other media had previously reported that the primary suspect had died. The most recent addition is a never-told story about Rev. Clyde Bennie Briggs, a black preacher who fought the Klan in the 1960s, and inadvertently played a role in the Dee-Moore murders.

Read new package of JFP stories about James Ford Seale and this case, published after the indictment:

March 21, 2007 - Fighting Back in the Klan Nation: The Untold Story of Rev. Clyde Briggs

May 30, 2007 – Dredging Up the Past: Why Mississippians Must Tell Our Own Stories

Dee-Moore Memorial to be placed in Meadville on Memorial Day. I have the .pdf version of the press release as well as a short rundown on the sequence of events, with attention to the JFP's involvement, something which has gone almost uncovered in the national press.

Looks like justice is breaking out all over: Retired trooper surrenders in civil rights-era slaying, says he is innocent

Well, from that picture, he doesn't look like a sick old man.

I can't wait to find out what's going on. I'll be reading throughout the day tomorrow.

Was the trial postponed again?

FYI looks like most of the links on this page are broken. :-/

I came here looking for a particular article. I seem to remember reading a JFP story about the murders that mentions news coverage at the time -- camera crews crowded around when they found the bodies, but then lost interest when they realized it wasn't Schwerner, Chaney and Goodman. Am I remembering that right?