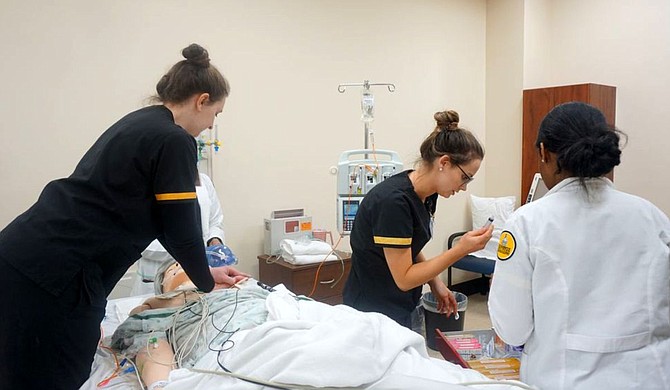 The University of Southern Mississippi’s College of Nursing and Health Professions is partnering with Merit Health Wesley in Hattiesburg to add two of the hospital’s nurses to the University’s clinical teaching faculty during the spring 2022 semester. Photo courtesy USM

The University of Southern Mississippi’s College of Nursing and Health Professions is partnering with Merit Health Wesley in Hattiesburg to add two of the hospital’s nurses to the University’s clinical teaching faculty during the spring 2022 semester. The goal of the partnership is to reduce the state's ongoing nursing shortage due to the COVID-19 pandemic, a release from USM says, by having nursing graduates work in a Mississippi healthcare setting while assisting USM in increasing its clinical faculty to expand enrollment capacity.

USM's Embedded Clinical Faculty model will use a practicing nurse with a graduate degree as the students’ clinical instructor, with students directly learning under a nurse who practices at the clinical site. USM uses a similar model for its nurse anesthesia program.

Merit Health Wesley will continue to pay their employees as the role of instructor is added to their job, the release says. CNHP will also expand the Embedded Clinical Faculty model to other clinical partners in Hattiesburg and on the Gulf Coast.

During the 2021 fiscal year, the JSU Division of Research and Economic Development received $54.4 million in research awards, including more than $11 million from the National Institute of Minority Health and Health Disparities to establish the RCMI Center for Health Disparities Research, a release from JSU says. The Division of Research also received $1 million from the National Science Foundation to partner with other universities to study the global impact of a controversial new generation of insecticides.

Mississippi State University's University Television Center will premiere a short documentary titled "Old Main" on Sunday, Jan. 23. The documentary pays tribute to a large dormitory on the MSU campus that burned down on Jan. 23, 1959. The MSU Films initiative, a UTC project to tell stories of the institution through those that witnessed them, developed the 11-minute film.

The documentary features an interview with a university alumnus who experienced the dormitory fire, with footage from that night and the aftermath. MSU Films also recreated scenes, taping a building being overcome by smoke and using actors as students who were a part of the evacuation, a release from MSU says.

MSU Films won a national Edward R. Murrow Award in 2021 for “The Last Supermarket,” an examination of a Mississippi Delta community which becomes a food desert when its only grocery closes. Upcoming MSU Films projects include “XIII,” which is about alumni who played a role in bringing the Apollo 13 spacecraft back to Earth in 1970; and “The Hungriest State,” a four-part miniseries of which “The Last Supermarket” is a part.

"Old Main" will debut on MSU’s Facebook page, @msstate, at 7 p.m. and will be simulcast on the university's MSTV channel. MSTV is available to MaxxSouth Broadband subscribers in the Golden Triangle and viewers with C Spire Fiber TV throughout the state on Channel 80. After the 7 p.m. premiere, viewers can find the production at films.msstate.edu.