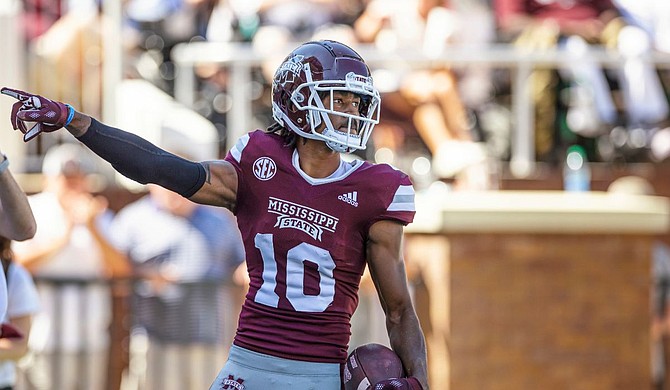 Mississippi State University is losing its record breaking wide receiver after just one season with the program. Redshirt sophomore wide out Makai Polk has announced he will enter the 2022 NFL Draft.

Polk started his college career at the University of California for the 2019 season. He appeared in all 13 games and made four starts. He caught 16 passes for 276 yards and two touchdowns.

In the unpredictable 2020 season, he appeared in four games with two starts. The Richmond, Calif., native caught 17 passes for 183 yards and one touchdown. He entered the transfer portal after playing in his final game.

Polk started slow at MSU early in the season. He didn’t gain 60 or more yards receiving in either of the first two games. Things started to come together in the third game of the season as he went off for 136 receiving yards on 11 catches with one touchdown.

He would finish the season with 1,046 receiving yards on 105 receptions with nine touchdowns. It would be one of the best pass catching seasons in MSU history as Polk rewrote the record book in one season.

Polk set the single season record for most receiving yards breaking a record that stood for nearly 45 years. The wide receiver broke Mardye McDole school record with his 1,096 yards season.

He also broke Fred Ross’ single-season reception record with his 105 catches. That shattered the 88 catches Ross made during his record setting season.

Polk led the Bulldogs in nearly every single receiving statistic. He led the team in catches, receiving yards, touchdowns and scoring.

In the Southeastern Conference, Polk led the conference with the most receptions. He finished one catch ahead of University of Kentucky wide receiver Wan’Dale Robinson.

Polk will learn which team he will be playing for if he is selected when the 2022 NFL Draft kicks off on Thursday, April 28. The draft runs until Saturday, April 30.

If Polk isn’t drafted he could sign with a team as an undrafted free agent. Polk will need to make a great showing at the NFL Combine if he gets an invite to help him move up draft boards.