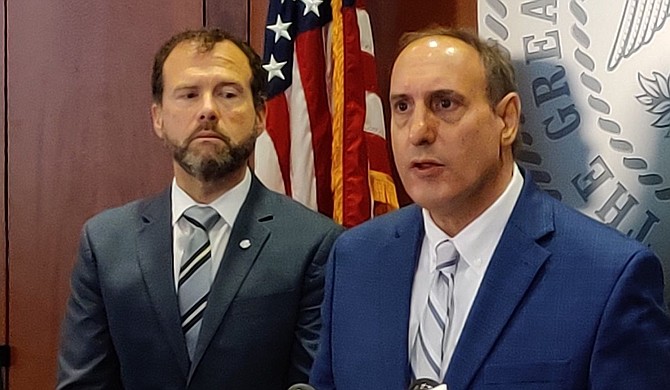 The new subvariant, dubbed BA.2, may lengthen the state’s slow decline in cases and hospitalizations due to its increased contagiousness. State Epidemiologist Dr. Paul Byers noted that the Mississippi State Department of Health has so far detected only one case of the new subvariant, though difficulty in detection may make accurate detection difficult. Photo by Nick Judin

A new “stealth” subvariant of the omicron COVID-19 variant, designated as BA.2 whereas the original omicron variant was named BA.1, has arrived in Mississippi. The new subvariant lacks a mutation that lets scientists determine which variant the virus belongs to, making detection more difficult.

BA.2 may also be considerably more contagious than already fast-spreading BA.1, potentially dragging out the slow decline in cases and hospitalizations seen across the country.

So far however, the Mississippi State Department of Health has only confirmed a single case.

“We have had one case documented in Mississippi to date,” State Epidemiologist Dr. Paul Byers said in a press briefing last week.

Byers says the state hasn’t yet seen the kind of rapid spread seen in some other countries.

“It did spread rapidly in some places that it has been identified in Europe, we just haven't seen that rapid spread here yet,” Byers said. “That doesn't mean that we're not going to.”

MSDH reports show 772,844 COVID-19 infections since the pandemic began, while some of the largest case spikes have been since omicron became the dominant strain in the state—MSDH reported 2,322 more cases just today. Byers says the state’s large infection history may be one reason for the subvariant’s slow spread.

“We got a whole lot of people who got omicron, and likely that that may limit the spread of BA.2,” he said.

“Information that I've gotten from CDC this week, they're seeing that if you've had BA.1 they're not seeing BA.2, so if you’ve had omicron already you’re probably not going to get BA.2,” Dobbs said.

For MSDH’s go-to monoclonal antibody treatment, Sotrovimab, efficacy against BA.2 may not be so straightforward.

“There is a small concern that Sotrovimab might not work as well against BA.2 as BA.1,” Dobbs said. “We're still waiting to see what that means.”

Current vaccines, however, are still considered to be effective against the new variant, and Dobbs urged Mississippians to get their booster shots.

“There's no reason to think that the vaccine's not going to provide the same amount of protection, and the booster is still important,” he said.