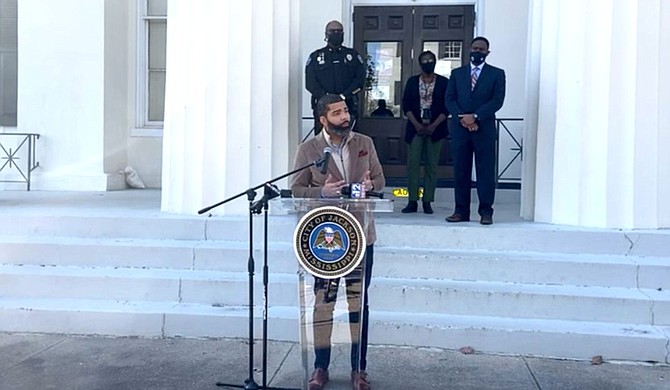 Mayor Chokwe A. Lumumba pushed back against the Environmental Protection Agency’s latest notice of non-compliance in his weekly press briefing, citing supply-chain issues beyond his control.

“The parts have been ordered for this panel, and like everything in the distribution chain in our world, we are waiting on the parts, and so Jackson is not in position in order to fix a panel without the parts that are provided by a sole source,” he said.

The EPA’s latest notice warned that the unrepaired equipment may lead to unsafe conditions in city drinking water.

“Low-pressure and loss of pressure in a drinking-water distribution system may cause a net movement of water from outside the pipe to the inside through cracks, breaks, or joints in the distribution system that are common in all water systems,” the report notes. “Backsiphonage occurs when pressure is lost in pipes, creating a negative pressure and a partial vacuum, which pulls water from a contaminated source outside the pipe into the treated, potable water inside the pipe.”

“This creates a suitable environment for bacteriological contamination and other disease-causing organisms, including E. coli, to enter the water distribution system downstream of the WTPs (water treatment plants), which then is delivered to users.”

Lumumba leavened his criticism with a conciliatory nod toward the EPA’s general stance on the state’s water woes.

“Our relationship with the EPA is still one which is collaborative, and we're working to not only address Jackson’s issues,” Lumumba said. “I agree with the EPA's overall approach towards environmental justice and one which looks to bring resources to cities that are tasked with these challenges.”

“Going into Saturday and Sunday, we had some issues with turbidity that caused us to not be able to produce as much water going out into the distribution system and ultimately not able to keep the pressure that we like,” Williams said.

Work will continue into the week, and Williams extended his appreciation for residents’ continued patience.

“We appreciate the continued patience obviously of Jackson Public Schools and all of those pockets of areas in South Jackson who continue to experience low water pressure,” Williams said. “We hope that we can get this resolved this week.”

“When the water-treatment facility was created, it wasn't imagined that we would have or experience the level of cold weather that we experienced frequently now,” Lumumba said. “If we lived in Cleveland, Ohio, then it would have been anticipated, and so that is a reality that we have to confront and are working on.”

Lumumba noted that new water meter installations will begin this week around Jackson, with city-contracted Utility Metering Solutions anticipating 250 installations per day continuing into 2023. More information on the ongoing installation as well as new account creation can be found here.

“We have been talking extensively about the need for new meters and the challenges we have,” Lumumba said. “We know that it presents challenges with our billing."