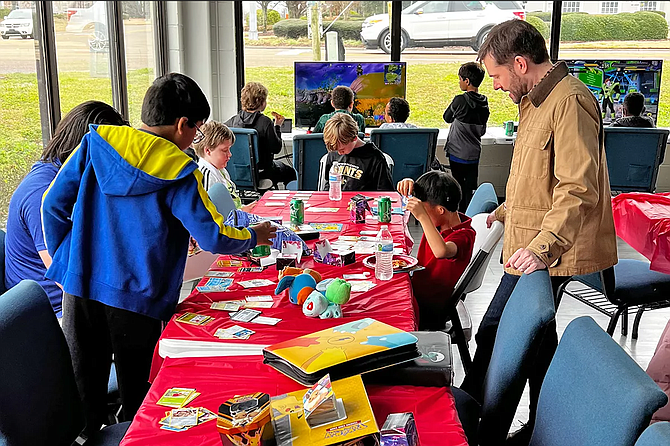 Mississippi native Jay Branch has organized the inaugural Kids Fest Jackson event taking place in Jackson, Miss., on Saturday, April 9, 2022. At the festival, among other activities, children will be able to play board and card games at tables that Van’s Comics, Cards & Games of Ridgeland, Miss., will manage. Photo courtesy Travis Ryder

Growing up in Goodman, Miss., event organizer Jay Branch lived for the outdoors. His adventures started in the 1980s with excursions on his tricycle as a young child, exploring all the nearby Holmes County dirt roads with his friends for hours at a time.

“I was a tricycle kid when I was young and lived out in the country, out where you could really ride a lot,” Branch says. “I always used to wear my trikes out from riding them so much, and when I got older I moved on to bikes and did the same thing.”

Before the pandemic, Branch had organized events across the South with AVC Conventions. Then in the midst of the COVID-19 pandemic, Branch started thinking of things he’d like to do when it became safe once more. He also found himself concerned about what sheltering at home for extended periods meant for children across the state, cut off from the outdoors and potentially unable to meet with friends or enjoy their usual activities.

“I wanted them to be able to have something to go back to and have fun when everything had waned enough for them to do so,” Branch says.

“At AVC we do a lot of events like Mississippi Comic Con, which over the years has skewed more towards adults and has more of a nostalgic set following it,” he continues. “Kids might find a few things they like at Comic Con, but I wanted them to be able to come back to an event with tons of things just for them.”

After conditions in the state started to improve by the end of 2021, Branch founded his own event organizing company called VXV Events, and through it he began planning one of his first new major events, the inaugural Kids Fest Jackson, set to take place at the Mississippi Trade Mart (1200 Mississippi St.) in Jackson on Saturday, April 9, from 10 a.m. to 5 p.m.

Branch derived the name of his company from the Latin phrase “Vi veri universum vivus vici,” which roughly translates to “By the power of truth, I, while living, have conquered the universe.” The phrase appears in Alan Moore’s graphic novel “V for Vendetta,” which links the phrase to “Christopher Marlowe’s “Doctor Faustus,” though other sources trace the phrase to Aleister Crowley’s “The Herb Dangerous (Part II): The Psychology of Hashish. By Oliver Haddo.”

Kids Fest Jackson will feature bounce houses, obstacle courses, a LEGO building area, a Nerf battle maze, a coloring area, photo ops with characters such as princesses and superheroes, slides, a 50-foot warrior jump course, artwork courses courtesy of local artists, balloon art, tricycle races, a magician, concession areas and more. The event will also feature free-to-enter tricycle races early in the day and a tournament-style race with a $5 entry fee in the afternoon, with the winner receiving a free tricycle. Proceeds from the race will benefit the Children’s of Mississippi hospital.

Corey Wright, naturalist and conservation educator for the Mississippi Museum of Natural Science, will host a live reptile display during the event focusing on animals native to Mississippi. Children will be able to get up close and touch animals like snakes, baby alligators and a “mystery animal” to be revealed during the show, as well as take photos and learn more about the animals on display. The museum will also have a dinosaur-themed exhibit and displays with information about its ongoing exhibits.

“Most of the animals we’re going to be bringing out are things that might be right in your backyard that you may never even notice,” Wright says. “I want people to be able to develop an appreciation and understanding of reptiles. They and other ‘creepy-crawly’ things may get a bad rap, but they’re all important to the environment in different ways.”

Other organizations across the Jackson metro will have displays and activities at the event. Mississippi Spay and Neuter will host pet-themed events, and the Mississippi Animal Rescue League will offer pet adoption services on site along with cats and dogs for children to play with. There will also be educational displays and booths for tutoring services from Sylvan Learning Center. Van’s Comics, Cards and Games in Ridgeland will host tabletop board gaming and card-game centers, video game kiosks and giveaways.

“The board games we have at Van’s range from anywhere to being from ages 4 and up to games for adults,” Travis Ryder, store owner of Van’s, says. “Board games and card games are a great way to build up math, language and social skills, as well as teaching kids to work together and use different parts and pieces to complete goals. It translates well to solving issues as an adult and is a thought-provoking way to bond with family as well.”

“I remember we had one family that came in on one of our Tuesday board gaming nights looking for something to do together on the parents’ night off,” Ryder recalls. “I introduced them to Dungeons and Dragons, which is full of problem solving and dice rolling, and gave them a starter kit to try it out. They came back about a week later and said it was the best thing ever and that they wanted more books and accessories to expand with. Seeing families come back for more after finding something to bond with their kids over is something I love to see.”

‘Something For All Ages’

When planning Kids Fest Jackson, Branch knew he wanted to have activities that would cater to kids of varying age groups so that all attendees can enjoy themselves and experience the joy he remembers feeling during his own childhood.

“I grew up with the Atari and early Nintendo consoles, an age that’s long come and gone by now, and what kids have nowadays is so much more advanced than what we had back in the day,” Branch says. “I was around during the first wave of early consoles that came and went, then got to see it explode into popularity again around the time I was in third grade.”

“My friends and I loved getting together with consoles at home or going to arcades at the mall and spending the day out there,” he recounts. “Sometimes we’d run through 20 bucks worth of quarters before we went home.”

“I wanted to make sure to have events for children of all age ranges represented here,” Branch adds. “You have things like coloring, bounce houses and meet-and-greets for the younger kids, with things like obstacle courses and Nerf games for the older ones. Some things, on the other hand, span across ages. LEGOs, for one, are something I think everyone can enjoy.”

Branch has been organizing concerts, comic-book conventions and art-related events since 1998. His decision to host Kids Fest Jackson indoors at the Mississippi Trade Mart came about as a result of a number of similar events he organized with AVC Conventions being rained out over the years.

“When I was growing up, a lot of times my friends and I found ourselves having a lack of things to do in Goodman outside of hanging out at arcades or pizza places,” Branch says.

“With Kids Fest, I want to offer something with options for kids who like to be physically active and for those who just like to sit and play as well. I want any kid to find something they like to do here.”

Kids Fest Jackson staff will sanitize all high-contact areas regularly throughout the event. Masks are recommended but not required. Kids Fest Jackson is complying with all current Jackson COVID-19 safety regulations and will announce changes if local or state policies should change.

Tickets for Kids Fest Jackson are available online through Tixr. Tickets are $15 in advance or $25 at the door on the day of the event. For more information on this and other events that Branch is helping to organize in the near future, visit vxvevents.com or find VXV Events on social media.