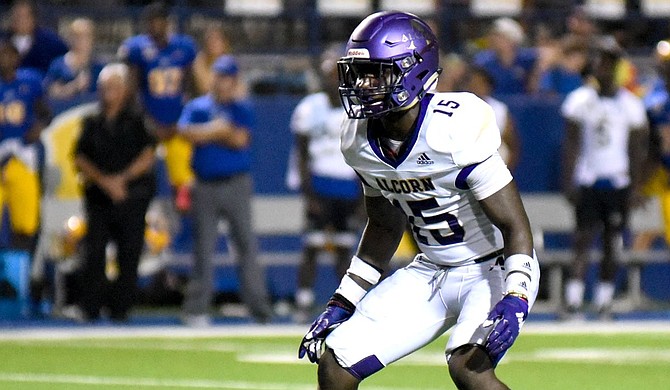 Alcorn State University found itself in a major hole against the University of Arkansas-Pine Bluff. The Braves were down by 16 points at the end of the first quarter and were down 19 points at halftime.

ASU slowly began chipping away at the Arkansas-Pine Bluff lead as the game went along. By the end of the third quarter, the Braves deficit was six points heading into the final 15 minutes.

While Alcorn State needed the offense to start producing points to get into the game, the team needed the defense to begin to make stops to give the offense a chance to try to complete a comeback.

Leading the way for the Alcorn State defense was junior defensive back Keyron Kinsler. He led both teams in tackles with 12 total tackles, eight solo tackles, 2.5 tackles for a loss, one forced fumble and one fumble recovery.

Early in the third quarter, Kinsler forced a fumble at the Alcorn State 38 yard line and recovered the fumble he forced. That led to a Braves touchdown that got the offense going in the second half.

Alcorn State found a way to finish the comeback for the 39-38 victory to open up 1-0 in SWAC play and move to 2-2 overall. This win marks the first SWAC victory for the Braves since they moved to the SWAC West division.

The Micanopy, Fla., native has started the season strong for the Braves. He is fifth in the conference in tackles with 31 total tackles. Kinsler has 15 solo tackles, 2.5 tackles for a loss, one interception, one forced fumble and one fumble recovery.

Alcorn State takes this week off before returning to the field for homecoming against Grambling State University. The Braves will have a “Purple Out” for the game that will be played Saturday, Oct. 9, on ESPN+ and kick off at 2 p.m.

Kinsler and the rest of the Braves will be looking for a 2-0 start in the SWAC West division. ASU is looking to extend its streak of SWAC Championships after opting out of the spring season earlier this year.