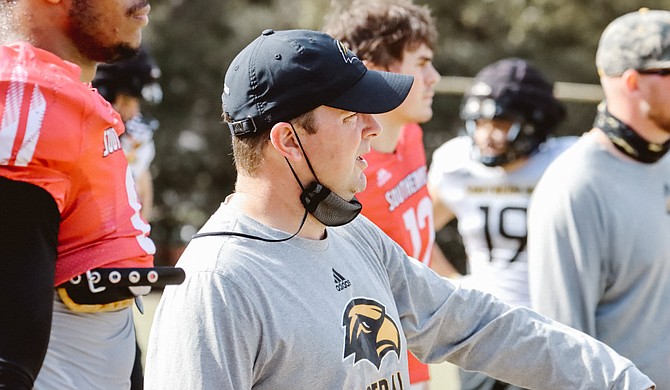 The University of Southern Mississippi, whose football team head coach Will Hall leads, announced on Tuesday, Oct. 26, that it will be leaving Conference USA, a sporting conference that it helped found in 1995. Photo courtesy USM Athletics

The University of Southern Mississippi announced on Tuesday, Oct. 26, that the school’s athletic programs would be leaving Conference USA. The Golden Eagles will be joining the Sun Belt Conference no later than 2023.

So what made USM, a charter member of C-USA, decide to leave the conference it helped form in 1995? The answer begins with the Southeastern Conference adding the University of Texas at Austin and the University of Oklahoma out of the Big-12.

When the SEC added two of the most influential programs out of another Power Five conference, teams began moving across the country. The Big-12, with only 10 members, would only be left with an eight-team conference.

C-USA not only lost USM, as Old Dominion University is also leaving for the Sun Belt, which could potentially add Marshall University as well, resulting in another loss for C-USA. That would leave C-USA with just five members, forcing the conference to scramble to add more teams to avoid falling apart.

The Sun Belt is rumoured to be trying to get Football Championship Subdivision power James Madison University to join. The additions could help the Sun Belt challenge the AAC as the top conference in the Group of Five.

After USM leaves, none of the charter members will be left in the conference, as all of the founding members besides the Golden Eagles had left years ago to other conferences.