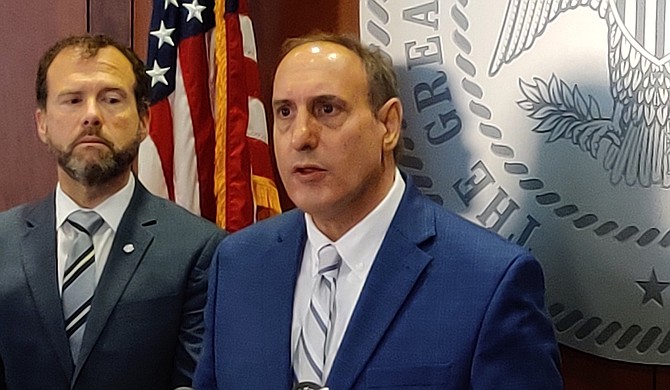 State Epidemiologist Dr. Paul Byers lamented the state’s grim death toll as “avoidable” during an Oct. 22 press briefing. Byers urged families to get their booster doses as soon as they are eligible. Photo credit Nick Judin.

COVID-19 has now claimed the lives of over 10,000 Mississippians, while over 500,000 people in the state have contracted the virus.

State Epidemiologist Dr. Paul Byers noted that even this grim milestone is likely an underestimate due to the methods of reporting.

“Remember, that's the number of individuals who were infected, who got tested, who were reported to us,” Byers said during an Oct. 22 press conference with the Mississippi State Medical Association. “That is likely an underestimate of the total number of cases of COVID in individuals in Mississippi.”

“Ten thousand deaths is staggering,” Byers said. “It just didn't have to happen like this. If we had more people who would get the vaccine, certainly we could have avoided some additional transmission and deaths. Our peak and our transmission of activity during the Delta surge was massive.”

“When we look at our hospitalizations and our folks who are in the intensive-care unit or on a ventilator due to confirmed COVID, we have seen some drops, but interestingly enough, over the last several days those numbers have stabilized, and really we're seeing a pretty steady state with those numbers now,” Byers said.

“I'm certainly glad that we're starting to see some declines, but these have been some grim milestones that we've passed or are approaching,” he said.

Byers changed to a more optimistic tone when speaking on newly available booster shots. Presently, 46% of Mississippians are now fully vaccinated, and the state’s vulnerable elderly population is 77% vaccinated.

“That's going to pay dividends for us, and it has, with the reduced mortality that we've seen,” Byers said.

Booster shots are now available for anyone who received their second dose of Pfizer or Moderna vaccines at least six months ago, while those who received a Johnson & Johnson vaccine may get a booster just two months after their first shot.

“If we want to get ourselves back to where we were before COVID, there's some simple things that we can do,” Byers said. “We can wear a mask when we're indoors in public settings; we can get vaccinated; we can get our family vaccinated. Maybe we can get those folks in our family who are eligible a booster dose. We can be safe when we go outside of the home. I think if we pull together and we continue to do these things.”

“We can get past this,” he concluded.