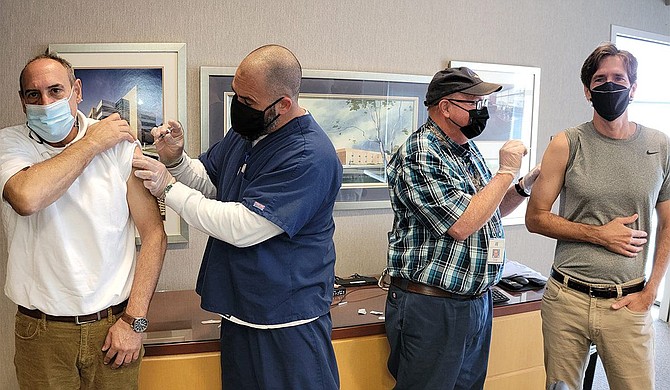 State Health Officer Dr. Thomas Dobbs and State Epidemiologist Dr. Paul Byers received their seasonal flu shots as shown in this Oct. 18 photo from the Mississippi State Department of Health. They encourage Mississippians to join them in getting their flu shots this season. Photo courtesy MSDH

“We're seeing a steady decline in cases, but persistent deaths,” Dobbs said. “We're worried about a plateau at a higher level, so we're still seeing ongoing cases and deaths sadly.”

The latest data from the Mississippi State Department of Health shows a seven-day rolling average of 102 deaths during the period of Oct. 12 through Oct. 17. The same weekly data shows 3,248 new cases of COVID-19, a daily rate of 464 new cases.

Hospitalizations are also down from their summer highs, with MSDH data from Oct. 17 showing 286 patients with confirmed cases of COVID-19. Intensive-care units housed 103 patients while 62 patients were on ventilators, both cases indicating less than half their respective mid-August numbers.

“We've really got to keep an eye on what that looks like with the impending flu season and the potential for cases,” Byers said. “We will see cases of flu, and we know that there's going to be vulnerable people who get flu, and those are the kinds of folks who end up in the hospital. And we've seen the hospitals have significant pressure before during flu seasons, so we’ll have to watch that closely.”

‘We Can’t Afford to Be Complacent’

Dobbs remained on the cautious side of optimism when asked whether Mississippi’s half-vaccinated and half-unvaccinated population constituted a glass half-full or glass half-empty scenario.

“We can’t afford to be complacent,” Dobbs said. “I certainly would say it's a half-full sort of thing because we also have a subset of folks who have natural immunity. So if we put those together it does give us a benefit, even though I hate using the word ‘herd immunity,’ because it's not really applicable to coronavirus.”

“We're not near that level,” he added. “We need to have 90% of people in Mississippi immune to be considered herd immunity.”

During the press briefing, former MSMA President Dr. Mark Horne lamented the grim fact that 1 in 300 Mississippians has now lost their lives to COVID-19.

“I got asked yesterday by a reporter about what I thought about the number of deaths in Mississippi, that one in 300 Mississippians has now died, and I said, ‘I'm just sad.’ I'm sad because there's so many of those deaths that were unnecessary,” Horne said.

“I think about this year, the number of people I've seen in their teens, 20s, 30s, that I've personally been a part of their care, and then the people in their 40s and 50s,” he said. “A coach from south Mississippi, healthy and you know, gone, and with kids. His daughter won't be walked down the hall by her dad, and it was unnecessary.”

As Mississippi passes 10,000 fatalities due to the virus, Dobbs implored Mississippians to get their flu shot and vaccinations.

“I think we've got a potentially worrisome cold weather spell coming up in the winter and the holidays,” Dobbs said. “We've lost almost 10,000 Mississippians. Our mortality rate is unacceptably high. We don't want anybody else to join that number.

“If you need to be doing something, if you need to be getting vaccinated or a booster and the flu shot, please go ahead and do it because we want everybody to get through this next whatever we're going to have with COVID, and then whatever happens after that we'll just have to see,” Dobbs said. “A lot of it depends on how many people are immune and how many people are getting boosted.”