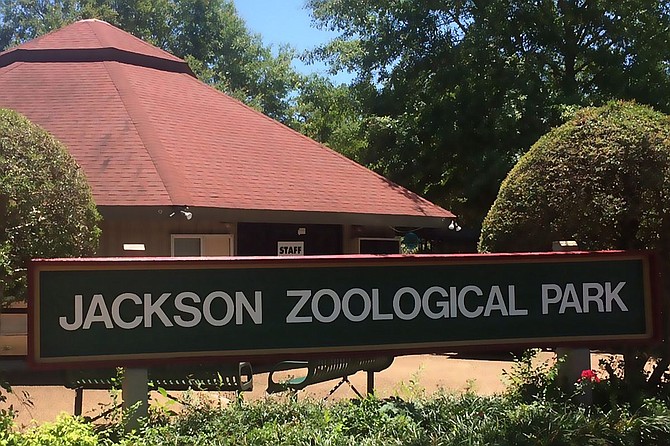 Mississippi Heritage Trust named the Jackson Zoo as one of its 2021 10 most endangered historic places. The zoo has been in its current Livingston Park location on West Capitol Street since 1921. Photo courtesy Jackson Zoo

JACKSON, Miss.—The Jackson Zoo’s announcement as one of the 10 endangered historical places in Mississippi for 2021 generated the most remarkable reaction among the people gathered at The Faulkner on Oct. 21, Mississippi Heritage Trust Executive Director Lolly Rash told Mississippi Free Press on Nov. 3.

“When we announced the Jackson Zoo, there was just this audible gasp,” she said in the phone interview. “Four hundred people in a room and everybody went, ‘Ooh.’ And then, a lot of chatter, everybody started talking.”

“And for the rest of the night, people came up to me with their I-remember-when story—‘I remember going to this zoo when I was kid,’ ‘I remember this association was learning about the natural world at the Jackson zoo.”

Rash said designating the Jackson Zoo as endangered provides advocates a tool to attract attention and funding to generate momentum around revitalizing the 100-year old facility. Mississippi Heritage Trust has made similar announcements every two years since 1999.

“We’ve been doing this program since 1999,” she told the Mississippi Free Press. “And it’s a way of raising awareness of the threat to historic places throughout the state that are meaningful to the people who live here.”

One hundred years ago, in 1921, the City of Jackson voted to establish the zoo on the present 110-acre land acquired in 1916 for $36,000. Since then, the zoo has gone from being a segregated facility that white Mississippians crowded into to create memories to a park that sits in a crumbling part of the city, dramatically hurt by white and economic flight starting in the 1970s and with steady loss of visitors and philanthropic support.

“The problems facing the Jackson Zoo and the neighborhood of West Jackson are myriad and complex,” Rash said at the October event. “But no problem ever got fixed by walking away from it.”

Rash acknowledged the argument among potential supporters that the zoo should move further east in the city in order to keep operating and attract funding.

“Rather than wasting time and energy debating the possibility of moving this 100-year-old institution to a location that is not fighting for survival against urban blight, poverty and crime, Mississippians should come together to address the needs of the stalwart residents of West Jackson and once again make the Jackson Zoo a place of pride for Mississippi,” she said.

City of Jackson Parks and Recreation Director Ison B. Harris Jr. said that three years ago the board of Jackson Zoological Society Inc., the nonprofit that used to manage the zoo, voted to move it out of west Jackson. At that time, Harris sat as a member of the board representing the City.

“There was a (feasibility) study done on how much money they can raise to actually upgrade the zoo; that came back (as) unfavorable at that time (regarding) what they felt that we could raise,” he told the Mississippi Free Press in a phone interview on Friday, Nov. 5.

“Then several of them made a motion that some people had told them that they would give them some funding if they move, but no one ever identified or showed us that funding,” he added. “I don’t think it was anywhere permanent, and they just wanted to move it up north closer to the museum.”

Facing immense funding challenges, the majority of the board in 2018 wanted to move the zoo to LeFleur’s Bluff State Park, on the eastern side of the city, close to Rankin County, saying a press release that the attendance had declined in recent years from 185,000 guests in 2003 to barely 100,000 in 2017.

Harris said the decision to relocate the zoo contributed to an additional reduction in visitation, as some people thought it had closed. “I think a lot of that had to do with the overall appearance of the zoo,” he said.

“It had a lot to do with our (limited) collection of animals in the zoo that we currently have,” he added. “With the (Jackson Zoological Society) stating that they wanted the zoo to move, there was a lot of momentum from communities who actually thought we were closed.”

The City’s Parks and Recreation Department gave up day-to-day operations of the zoo in the mid-1980s, The Clarion-Ledger noted in 2018.

Negotiations with ZoOceanarium Fell Through

The City then closed the zoo. It had entered into negotiations with zoOceanarium Group LLC in January 2019 to take over the management of the Zoo from three companies that submitted proposals in August 2018, including Zoo Managerial Services LLC and Jackson Zoological Society.

But after over two years of negotiations, the group pulled out in April 2021, with ZoOceanarium Managing Partner Chris Davis citing “hostility from some (city) council members.”

In a December 2020 special council meeting, Ward 7 Councilwoman Virgi Lindsay unsuccessfully pushed the group for a commitment to get The Zoological Association of America’s accreditation.

The City turned the workers from contract positions into salaried employees with benefits in June 2021.

The U.S. Department of Agriculture gave the City its own temporary exhibitor’s license in July 2020, and it opened to the public on a limited basis in August 2020. It is currently open from 10 a.m. to 4 p.m. from Thursday to Sunday every week. On Oct. 4, 2021, the City announced it had obtained a three-year license from USDA after a 10-hour inspection.

“We were at one point AZA-accredited, and so now we actually had just spoken with AZA and just received the information (that) we could actually start that process,” he said. “AZA accreditation could take anywhere from three to four years. So it’s something that doesn’t happen overnight. You typically have to work through it.”

Ongoing Work Around the Zoo

The zoo is located on West Capitol Street in Ward 5 in the city. Ward 5 Councilman Vernon Hartley told the Mississippi Free Press in a Nov. 3 phone interview that the City has engaged Revitalize Mississippi, a nonprofit, to demolish some abandoned buildings to reduce blight, which he said contributes to the increased crime rate.

Hartley said he hopes that the designation of the zoo as an endangered historic place in Mississippi will provide an avenue to get more funding sources to do further upgrades to the zoo. He said the city’s work on West Capitol Street, where the zoo is, and demolishing abandoned houses will beautify the area and enhance the experience of those coming to the zoo.

“The potential now, I believe, lies in our ability to market it and upgrade the surrounding area,” Hartley added. “And then we have Revitalize Mississippi that’s getting funding through some of its donors to demolish dozens of homes and stuff there—old, old abandoned buildings.”

“We’re going to be cleaning up that area as well,” he added. “So all those different things, once we finish those things, the only thing we ask is people just come out and enjoy it.”

“Thirty years ago, events like Zoo Blues drew over 10,000 visitors from around the country to Jackson and its zoo. Today, with the entrance of the Jackson Zoo overlooking boarded-up buildings, attendance has dropped significantly,” Mississippi Heritage Trust said in an interactive map.

In October, Rash said the zoo’s historical significance included some distinct buildings there, including the Rhino building and the castle on Monkey Island, which Works Progress Administration workers constructed with native sandstone during the Great Depression.

Former U.S. President Franklin Delano Roosevelt established the WPA in 1935. The Jackson Zoo benefitted from the construction spree set to counter the Great Depression through the New Deal. Before its dissolution in 1943, the WPA employed 8.5 million people overall. State and local governments contributed a portion of the cost of the work it did.

Livingnewdeal.org named the buildings WPA constructed in the Zoo as the former rhinoceros house, old concession stand and old restrooms.

‘There’s a Lot of Work To Still Be Done’

Harris said that the designation allows the City to apply for a $250,000 in Community Preservation Grant from the Mississippi Department of Archives and History, which requires a 20% matching grant.

“I think there are a total of seven or eight buildings that are designated as historical sites that will benefit from the fund,” he said.

Harris added that the Zoo’s designation as an endangered place can also open other funding sources. “Obviously, there is a disappointment level that comes with that (designation),” he said. “However, there’s also an opportunity for us to do some wonderful things with this.”

“We take this as an opportunity, more than anything, to do something better.”

The zoo has seen $300,000 worth of renovation in the last year and a half, including painting over 30 buildings, repairs to heating, ventilation and air-conditioning systems, and addressing safety issues. He said the zoo has seen a steady increase in visitors since its reopening in 2020.

“We’d done quite an extensive work there, but to be honest with you, there’s a lot of work to still be done,” Harris said.

Harris said that the zoo lacked “the larger animals that a lot of the other zoos in the region or in the South have.” As the collection became older over the years, he said, “we never worked to replace those collections.”

The director said that despite the downward trend of visitors to the zoo for some years, they have steadily increased over the last few months since its reopening in August 2020, peaking on Sunday, Oct. 31, at the Zoo’s Halloween event, with more than 1,000 visitors that day.

CORRECTION: The original story above named the wrong U.S. President Roosevelt as starting the Works Progress Administration. It is now corrected.