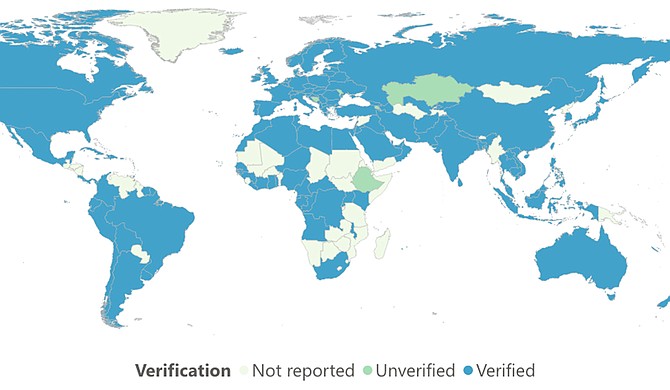 The Mississippi State Department of Health is reporting 554 COVID-19 variant cases across the state to date, 448 of which are the United Kingdom variant. The rest include low numbers of Brazilian, Californian, South African and now Indian variants. Photo courtesy CDC

Mississippi saw 10 new cases of COVID-19 variant B.1.351, commonly known as the South African variant, in outbreaks among long-term care facilities this week. The Mississippi State Department of Health reports that the 10 infections were breakthrough cases, meaning the infected individuals had been previously vaccinated.

One fatality resulted from the infections, as well as two cases requiring hospitalization. MSDH reports that seven of the 10 breakthrough cases had minimal to no symptoms.

"Although one death is extremely unfortunate, the fact that most of these cases have had minimal to no symptoms in highly vulnerable individuals is extremely encouraging," State Epidemiologist Dr. Paul Byers said. "The vaccines currently available provide excellent protection against severe disease. While these illnesses are caused by variant strains, the outcomes of all these cases would likely be much more severe if they were not vaccinated."

"It’s vitally important that all health-care and long-term care facility staff get vaccinated against COVID-19," Byers said. "We need to protect our most vulnerable populations."

Additionally, three cases of the so-called Indian variant, B.1.617.2, have also been identified inside the state. One of three identified sub-variants, the three cases have been individually identified in Claiborne, Smith and Hinds counties.

“Investigation is ongoing,” a May 27 statement from MSDH says. “But at least two are directly associated with travelers from India and Nepal.”

As of May 21, MSDH data have identified 554 variant cases across the state, most of which are the United Kingdom variant. MSDH reports 254 breakthrough cases out of almost 900,000 fully vaccinated Mississippians, a rate of less than .0003%.