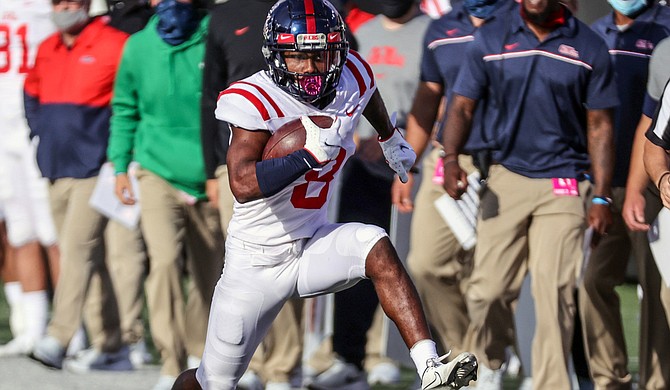 The New York Jets used the second overall pick in the 2021 NFL Draft to select quarterback Zach Wilson out of Brigham Young University. As the franchise begins another reset, it would be important for the team to help their quarterback be successful.

New York used its second first-round pick to select guard Alijah Vera-Tucker, a guard out of the University of Southern California with the 14th overall pick. The Jets had protection for their young quarterback.

The only thing left was to find Wilson a weapon he can throw to and grow with in the team’s offensive system. It was a no brainer to take University of Mississippi wide receiver Elijah Moore with the 34th overall and second pick in the second-round.

Moore gives Wilson a big-play wide receiver right away and helps an offense that finished 32nd out of 32 teams for the last two years. The junior wide receiver has blazing speed having 4.32-second time in the 40-yard dash.

Going into the draft, Moore was thought to be a late first-round pick or early second-round pick. This wasn’t a reach by the Jets as Moore has the talent to become the next superstar wide receiver in the NFL.

The Fort Lauderdale, Fla., native, only played in eight games last season due to COVID-19 and him opting out of the team’s final regular season game against Louisiana State University and the Outback Bowl against Indiana University.

Moore didn’t disappoint in his eight games of work. He made 86 receptions for 1,193 yards and eight touchdowns as he added another 64 yards on the ground on 14 carries.

Spencer’s teammate Kylin Hill was taken three picks later by the Green Bay Packers in the seventh-round with the 256th pick overall. Hill is also known for helping spur the change in the state flag.