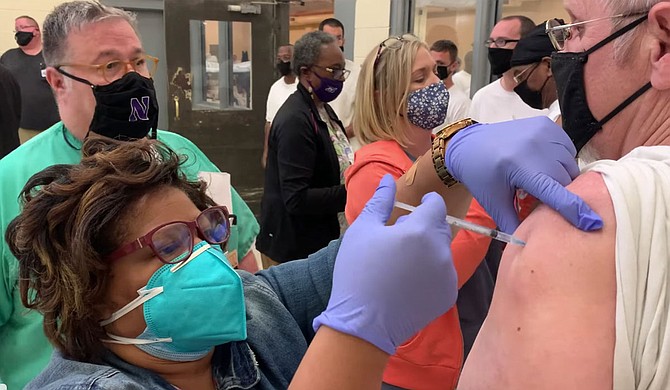 The Mississippi Department of Corrections began vaccinating inmates en masse on March 19, starting with the Central Mississippi Correctional Facility in the city of Pearl. MDOC health-care workers, through correctional health-care company VitalCore, vaccinated “nearly all” of the prison’s 3,017 inmates by the end of Friday.

MDOC plans to vaccinate inmates at the Mississippi State Prison at Parchman this week, with vaccinations planned next week for the South Mississippi Correctional Institution.

Vaccinations are not mandatory for inmates, but only 1 percent of inmates have refused the shots. CMCF Superintendent Ronald King encouraged prisoners to receive them, noting that he and other staff members have participated.

Vaccinations are not required for visitors to state prisons, but MDOC conducts temperature checks before allowing visitors to see inmates.

“Right now, Mississippi is one of the only states in the nation where any person above the age of 16 that wants to get a shot, can get a shot,” Reeves said.

Reeves spoke to concerns about vaccine safety, noting that hesitancy still exists in Mississippi and across the country. The governor encouraged Mississipians to get vaccinated, noting that he and his family received their shots.

The South African variant of COVID-19, officially titled B1351, has now been detected in a patient from Harrison County on the Gulf Coast. The individual did not have a recent history of travel, indicating possible transmission from within the state.

While the AstraZeneca and Johnson & Johnson vaccines showed slightly decreased resistance to transmission and mild-to-moderate symptoms, all available vaccines still gave strong protection against the worst cases including hospitalization and death.

In a March 19 press briefing, State Health Officer Thomas Dobbs described the new variant as “somewhat concerning, not surprising, but a strong reminder that we are not remotely out of this.”

“Initial evidence shows that Moderna and Pfizer are effective,” Dobbs said. “So please get vaccinated now and take simple precautions to prevent the spread of COVID.”