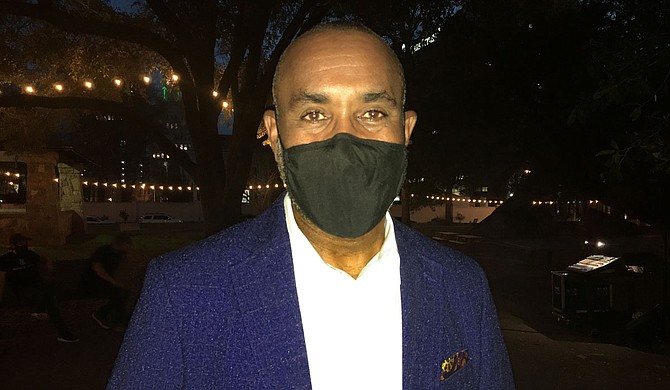 Tommie Brown is the liaison between the Downtown Jackson Partners, City of Jackson and Stewpot Community Services for homelessness outreach. Photo by Kayode Crown

The Downtown Jackson Partners Homelessness Outreach Coordinator Tommie Brown has, since January, identified and helped 25 homeless Jacksonians get the services that they need, he told the Jackson Free Press at an event the organization held on March 11 at Smith Park.

"We have, in the over the two months that we've been on the ground, managed to identify about 25 individuals who are living on the streets and who we have intentionally made sure we are available to them every day of the week," he said. "And so we've not only identified them, but we're tracking their movements and tracking where they are in life in order to make sure they get the services that they need."

Downtown Jackson Partners President John Gomez told the Jackson Free Press that Stewpot Community Services, Galloway United Methodist Church and Visit Jackson joined in the initiative. "We know this is a small piece of the whole puzzle to try to help the homeless, but we realized that we need to be more active, take a more active role in helping," he said at the event, which included the official unveiling of lights at Smith Park.

"We contracted with Stewpot Community Services to provide this outreach worker who will go out on the streets, meet with the homeless where they are and identify their needs, develop a relationship, and then see if they can find, refer them to a service that they can get them off from just surviving on the streets to hopefully a stable environment."

Downtown Jackson Partners Homelessness Committee Chairwoman Pat Bennett told those gathered at Smith Park that their efforts include finding temporary housing for people to get off the street and providing services for those who want help with addiction.

"In addition, during the course of this pandemic, when we are all in masks, we are helping with supplies to them, providing them food. And we are also working to get the vaccinations for them," Bennett said.

An Increase in Homeless Population

Coordinator Tommie Brown said Jackson is experiencing an increase in its homeless population similar to other cities around the nation. "My day-to-day activities include coming into the downtown Jackson area, visiting all of the hot spots, meaning the areas where our homeless friends hang out, where they sleep, where they eat, and things like that. And to build relationships, meaningful relationships with them, (and) find out what their needs are," he said.

Brown said he tries to help reconnect them to their family support system and, if that is not possible, find them permanent housing. "And oftentimes that means helping them to get the necessary identification, like birth certificates, Social Security cards, state ID, and then ultimately to connect them with our rapid rehousing program workers who then start the process of getting them into permanent housing," he said.

People without a home and living on the streets are often dealing with mental illness, which scares people, Brown added. "We answer calls from the (downtown) community to come out and to address those crisis situations," he said. "And we connect them with Hinds Behavioral Health Services and get them to the places that they need to be in order to access help."

"We got one individual in a drug rehab; that happened yesterday morning. We've responded to three individuals who were (they) are having mental crises and managed to get them into facilities that will help them," he added.

Experts have called on relieving the police of being solely responsible for dealing with calls involving people dealing with mental illness, replacing police response with more social-worker engagement.

Brown explained that he comes into the work after almost 20 years as a Jackson Police Department officer and 10 years as an outreach worker. "This opportunity is one that allows me to use my background and my passion to actually be a part of this collaborative effort to address homelessness effectively and to kind of move people to where they need to be," Brown said.