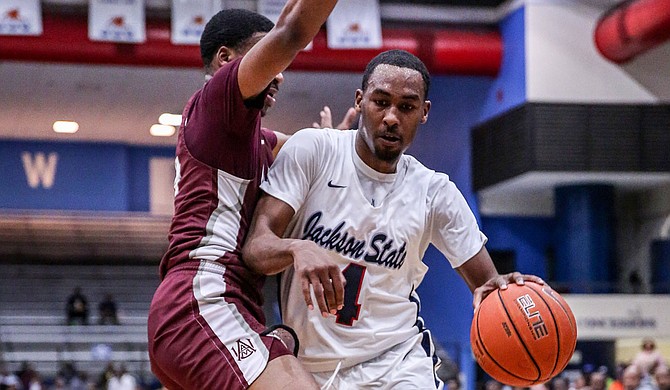 The 2020-2021 college basketball season is quickly coming to an end. Finally, March has arrived and with it comes the madness of conference and NCAA tournaments.

Jackson State University senior guard Tristan Jarrett seems to be peaking at the right time. Jarrett is enjoying his best season with the Tigers as he tries to lead his team to an NCAA Tournament berth.

Jarrett scored 17 points and grabbed three rebounds in a 68-54 win over Mississippi Valley State University on Saturday, Feb. 27. He exploded against the University of Arkansas Pine-Bluff on Monday, March 1, as he set a season high in scoring with 32 points while adding 13 rebounds, one block and one assist. His massive effort helped JSU hold on for a win in overtime.

The Brownsville, Tenn., native averaged 24.5 points during the last two games. His efforts earned him SWAC Men’s Basketball Player of the Week. This is the second time this season that Jarrett has been named men’s player of the week.

Entering the season, Jarrett was named SWAC Preseason Player of the Year. There is no doubt he is living up to the lofty expectations as he has scored in double figures in every game this season. He has scored over 30 points twice this season against Arkansas Pine-Bluff. Including his two 30 point games, he has scored 20 or more points in eight of the Tigers 14 games this season.

The senior guard has put his name all over the conference leaderboard in stats. There are few categories he isn’t ranked highly so far this season.

The Tigers are just two undefeated teams in the SWAC currently. The other team is Prairie View A&M University with an 11-0 record. Both games between JSU and Prairie View were postponed.

The Tigers will then play in the conference tournament. The SWAC Tournament is scheduled from March 10 to March 13 in Birmingham, Ala.