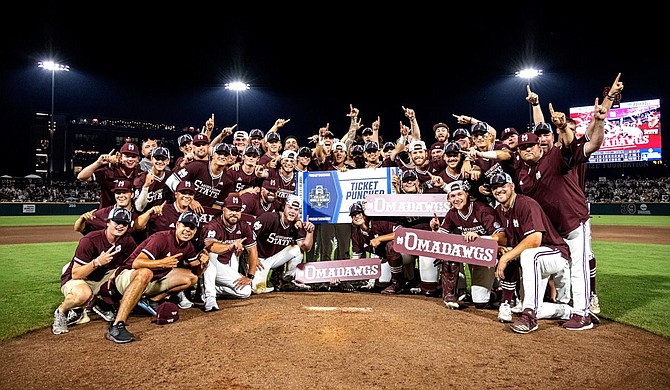 Fans of Mississippi State University baseball are enjoying a thrill ride at the 2021 College World Series. The Bulldogs are 2-0 in two vastly different wins and both were nailbitters that kept fans on the edge of their seat till the end.

MSU opened the CWS against the University of Texas at Austin was a pitching masterpiece by the Bulldogs. Starting pitcher Will Bednar combined with Landon Sims to shut down the Longhorn offense.

Bednar set a MSU record for strikeouts at the college world series as he fanned 15 batters over six innings. He allowed just one hit, one walk and hit one batter during his dominating start.

Sims came on in relief and struckout another six batters during three innings of work. He allowed three hits and one run as he closed out the Longhorns.

The two combined for 21 strikeouts to set an NCAA College World Series record. It was a good thing that pitching carried the day as the Bulldogs offense struggled to get going most of the game.

In the fourth inning the Bulldogs were able to cobble together two runs and played error free defense to get the win. Texas hit a homerun in the ninth inning but it wasn’t enough as MSU won 2-1.

Game two for the Bulldogs was a much different affair against the University of Virginia. It wouldn’t be a pitching duel between these two teams as offense carried the day.

MSU went through the first seven innings without earning a hit. The only baserunners the Bulldogs could manage over those seven innings were a walk and hit by pitch.

Things turned around for the Bulldogs in the eighth inning. The rally started with Kellum Clark hitting a two run home run to cut the Virginia lead in half.

SEC Player of the Year Tanner Allen went yard for a three-run shot that gave the Bulldogs their first lead of the day at 5-4. Scotty Dubrule hit a single to add an insurance run as Tanner Leggett scored to give MSU a 6-4 lead.

Virginia would add a home run in the bottom of the eight but they couldn’t muster another run. The 6-5 win moves the Bulldogs from a win away from playing for a national championship.

MSU will await the winner of Texas and Virginia that will be played on Thursday, June 24, at 6 pm and broadcast on ESPN2. The Bulldogs only have to win Friday, June 25, at 6 p.m. on ESPN.

If the Bulldogs lose on Friday, they will play a winner take all game on Saturday. A win Friday puts MSU in the three-game championship series.