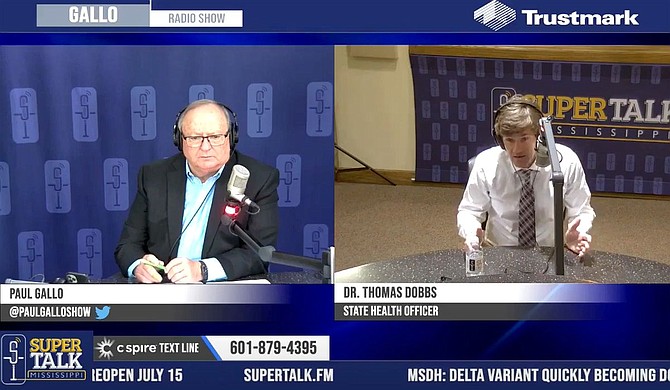 While warning about the rise of the Delta variant in Mississippi, State Health Officer Thomas Dobbs said vaccinated individuals by and large maintain their resistance to the disease, while those unvaccinated may face substantially greater risk of infection. Photo credit SuperTalk Mississippi

The more contagious Delta variant of COVID-19 is now the dominant strain in Mississippi, leaving unvaccinated Mississippians at higher risk of contracting the virus. The strain is rapidly out-competing other variants across the U.S., leaving the country to deal with what is fast becoming two different epidemics.

“I would say that it is now the dominant strain in Mississippi,” Dobbs said in a June 30 Mississippi State Medical association press briefing. Mississippi State Department of Health data show a 162% increase in Delta infections for the last week, with 60 out of 78 of those cases reported from Hinds, Rankin and Madison counties.

The distinction marks a tipping point for the state, which still falls below 35% in total vaccinations. States with pockets of low vaccination rates like Mississippi are at much greater risk of increased infection due to the variant, which now comprises 20% of all new cases in the U.S. Some northeastern states like Vermont have reached above 60% vaccination rates, while the South retains lower-than-average vaccination rates.

Preliminary studies show that the Delta variant is 60% more transmissible than the previously dominant United Kingdom or Alpha strain, which is itself 40% more infectious than the original strain.

““The way that these viruses work is when they reproduce themselves, they're error prone,” Dobbs said in a June 30 interview on SuperTalk Mississippi. “So sometimes there's random changes that happen just through dumb luck that happen to be more potent. The challenge is the more coronavirus there is out there, the more people that have it, the more likely we are to see these sort of random mutations that lead to these dangerous variants.”

Authorities in some countries such as Israel and Australia are seeing Delta comprise the majority of new cases, while Indian authorities recently discovered a new sub-variant of Delta itself.

State health officials cautioned Mississippians not to let their guard down over July 4 weekend, especially as the Delta variant has been shown to spread easily through younger unvaccinated people by way of summer events.

“As we approach the 4th of July, we do hope people can show some moderate behavior, try to do stuff outside if you can, primarily, especially if you're around folks who are unvaccinated or under vaccinated,” Dobbs said. “If you haven't gotten (the vaccine) yet, now's your time.”

“We may see some increased cases and hospitalizations after that if we're not taking the proper precautions now,” State Epidemiologist Dr. Paul Byers warned. “The way to beat this, the way to interrupt the cycle of continued concern over variant strains that are highly transmissible, that can lead to more cases, hospitalizations and deaths, is to get vaccinated,” he said.