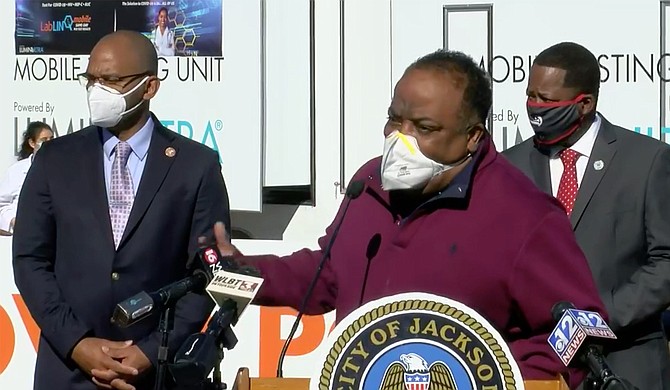 Charles Pickett, chief executive officer of a mobile laboratory company, LABLINQ, explained the importance of testing to mitigate the risk of COVID-19 virus at a press conference on Thursday, Jan. 14. Screenshot courtesy WLBT

Only 18% of those who have been vaccinated in Mississippi are African Americans, though they account for about 40% of the population, Mayor Chokwe A. Lumumba said at a media briefing Thursday.

"We have to do all that we can to serve communities that are underserved, and it is Black and Brown communities that have a disproportionate effect as it relates to this virus," he said. "And as it relates to the number of individuals, the percentage of individuals who have actually been vaccinated, it is a sad statistic, and it is statistics that even as I talked to (State Health Officer) Dr. (Thomas) Dobbs, he acknowledges that they have to improve and do better."

At the event, Lumumba introduced a mobile laboratory company, LABLINQ, as a partner with the City to offer COVID-19 testing across Jackson, with results obtained in less than 24 hours. The mayor explained that as the demand for vaccines outstrips the supply, adequate testing is important for early detection of the virus to save lives.

"At this point in time, the demand for the vaccines far exceeds or far outweighs the access to it. And it is important that we have early detection as it relates to any virus or any disease," Lumumba said. "There's only a class of people that are eligible to take the vaccine at this time; those are individuals who are 65 years and older, individuals who work in health care, or people 16 years and older who have a chronic health condition."

"So LABLINQ has stepped up with the City of Jackson in order to provide a mechanism by which people can be tested, tested early, and tested often in a noninvasive way. That means that it does not require a Q-tip of your nose or down your throat," the mayor added.

“It simply requires a saliva sample for us to be able to better understand where the infection is within our community."

The city council approved the City's partnership with LABLINQ at its Dec. 8 meeting, one week after the mayor disclosed that some neighborhoods had seen a 142% increase in COVID-19 cases. Later, on Dec. 22, Chief Administrative Officer Robert Blaine announced that the City had "moved from localized hotspots to community spread."

“If you are uninsured, and you have been in contact with someone who has contracted the virus, If you are feeling symptomatic, then you can be tested for free,” Lumumba said at the media briefing. “If you are insured, then, of course, you could be tested based on your insurance policy as well. And so this ultimately is something that is available to all of our residents, and we want people to take advantage of it.”

"Onsite Laboratories will bill the health insurance of employees and individuals given the test."

LABLINQ Chief Executive Officer Charles Pickett said the initiative is about helping people of color wade through the COVID-19 crisis through “accurate early detection of this disease.”

In a report dated Nov. 30, the Centers for Disease Control said African Americans are more likely to be affected by the COVID-19 infection than their white counterparts. As of then, the rate of cases among African Americans is 40% more than for white people; rate of hospitalization is nearly four times more than for white people, and the rate of deaths almost three times more.

"Race and ethnicity are risk markers for other underlying conditions that affect health, including socioeconomic status, access to health care, and exposure to the virus related to occupation, e.g., among frontline, essential, and critical infrastructure workers," the report noted.

‘Take The Time To Get Tested’

City Council President and Ward 6 Councilman Aaron Banks said that it will be one mobile unit per ward. "The best defense for this virus is to get tested," he said. "It is important that you take the time to get tested."

"We can't afford to put our grandmothers, our grandfathers and our people that we love at risk because we won't do what is simple, and that's get tested so that you can know where you are.”

Jacksonians can schedule an appointment with LABLINQ through an online portal. “We may bill insurance, but by law the insurance company may not charge you any co-pay, deductible or out-of-pocket expense for the test,” and there is no cost to both the insured and uninsured, LABLINQ said on its website.

Only two locations are live on the website at press time: Central Mississippi Health Services, 1134 Winter St., and New Jerusalem Church, 5708 Old Canton Road. "The others should be online by next Friday (Jan. 22)," Pickett told the Jackson Free Press.