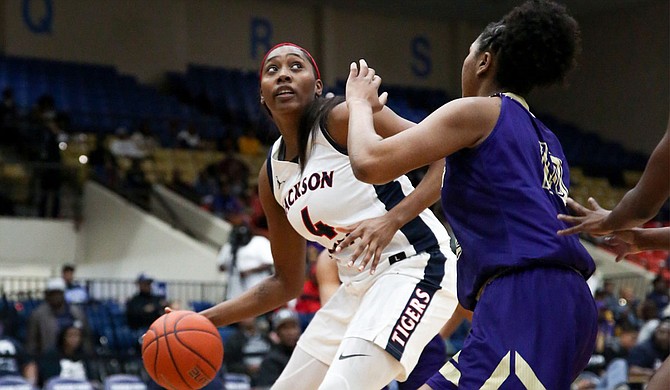 Ameshya Williams is delivering on the lofty preseason awards she received as the senior began her final season at Jackson State University. Jackson was named SWAC Preseason Play of the Year and SWAC Preseason Defensive Player of the Year.

The Gulfport, Miss., native scored 14 points and pulled down 14 rebounds in the Tigers 64-56 win over Alabama A&M University. She added a steal, block and assist to finish filling up the stat sheet.

Against Alabama State University, Williams dropped 25 points and snagged 23 rebounds to keep JSU in a tight contest. Even with her seven blocks, steal and assist it wasn’t enough for the Tigers to win.

In December, she was named SWAC Women’s Basketball Player of the Week for her play against Nicholls State University. Wiliams scored a career-high 28 points and grabbed 14 rebounds as the Tigers won 75-60.

The center has enjoyed three games where she achieved a double-double. Her first one came against Stephen F. Austin University as she scored 14 points and 12 rebounds in a blowout loss. Her second double-double came against Nicholls State and the third against Alabama State.

Williams is averaging 17 points and 12.4 rebounds per game this season. She is second on the JSU team in scoring and fourth in scoring in the SWAC. She leads the Tigers and the conference in rebounds and blocks with 3.3 per game.

Jackson State needs Williams to keep playing at a high level. The Tigers are 2-5 overall and 1-1 in SWAC play. The Tigers were the Preseason pick to finish first in the conference this year.

JSU and Williams are set to play rival Alcorn State University on Saturday, Jan. 9, at home. The Tigers stay at home for a game against Southern University on Monday, Jan.11. Both games could help the JSU get back on track in the conference.