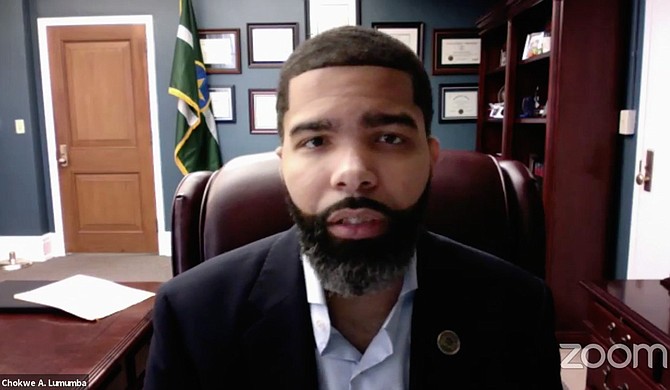 Mayor Chokwe A. Lumumba explained the rationale for imposing a five-day 10 p.m. to 5 p.m. youth curfew to those under 18 to the media via Zoom on Feb 4. Photo courtesy City of Jackson

Mayor Chokwe A. Lumumba imposed a five-day curfew order for those under age 18 from 10 p.m. to 5 a.m. due to rising crime in the capital city. He signed the order Wednesday after declaring a state of civil emergency, which he later said allowed him to institute the curfew. Lumumba said that the curfew order will protect young people as the pandemic has limited the usual social structures.

"We have far too often found many of our young people in unorganized capacities and at a higher risk than most residents," Lumumba told media in a virtual press briefing yesterday. "And so I believe that we have to do everything that we can to protect the health and safety of our residents."

The mayor opened the possibility for the extension of the curfew order, which is limited to five days at one time based on the law referenced in the order.

"We do not believe that this is the panacea, we do not believe that this is the sole means by which some of the more violent crimes that we have seen, some of the burglaries that we have seen may reduce," the mayor said about the strategy that criminal-justice reformers typically oppose. "And we do not put all of crime at the foot of our young people, but we do think that this is part and parcel of a multifaceted approach in which we'd like to see an effort go forward that protects our young people and protects our residents at large."

The mayor explained that "younger actors" have been involved in burglaries and said young people caught violating the order will be put into the youth court system and treated under the juvenile-delinquency statutes.

Lumumba indicated that police would not arrest or detain young people caught out after curfew, not making it clear how JPD plans to then keep them off the streets after stopping them. "If there is a circumstance in which (law-enforcement officers) felt that they needed to actually detain someone, it is this administration's position that we treat everybody with dignity and respect. [W]e would be monitoring any circumstance in which someone was detained or mistreated in that process," he added.

The mayor also declined to answer a question about what recent crime data shows about the times minors commit crimes in Jackson—whether typically during curfew or non-curfew hours.

The curfew order contains exemptions: those accompanied by a parent or guardian or authorized by them, if legally employed with written evidence of employment, medical emergency, and when exercising first amendment rights of freedom of religion, freedom of assembly, and to protest, with a written statement presented to law enforcement to the effect.

Youth curfews, while assumed to be a solution to youth crime, have long been controversial nationally as well as in Jackson, where they are perennially revisited as a response to youth crime. A white teenager's family sued the City of Jackson in 2006 for detaining their daughter who was out after a youth curfew that was later lifted. Many critics point out that they typically target young people of color.

"I feel for the mayor and his desperation in trying to mitigate the level of violence and trying to lower it at this time," he told the Jackson Free Press. "At the same time, it is almost counterproductive to try to keep people who have been basically locked down to continue to be locked down."

"It seems to be an understandable and desperate move that is bound to work at only the minimal level," he added.

Noblet, based in Los Angeles, was a lead investigator for the 2016 BOTEC reports on gang and youth violence in Jackson and a senior consultant on conflict and violence with the Urban Peace Institute there. His expertise is decreasing gang violence through a variety of means from policing to interventions such as those detailed in the BOTEC reports, which show that interactions with police are one of the key precursors to a young person committing worse crime later.

Jackson has a history of enacting curfew ordinances for juveniles, despite ample research showing that such curfews often do not deter crime and violence. One of the candidates for Ward 2 special election last year, Melinda Todd, said she would propose a return to the practice.

Northwestern University Clinical Professor of Law Sheila Bedi, formerly the co-director of the Mississippi Youth Justice Project in Jackson, has long warned that a youth curfew in Jackson is a bad idea.

"A curfew won't, and hasn't, worked," Bedi wrote in the Jackson Free Press in 2006. "Jackson's juvenile curfew has been in effect since 2001—even though in 1995 the National Council on Crime and Delinquency found that curfew enforcement is ineffective at reducing crime and unnecessarily funnels large numbers of non-delinquent youth into a criminal justice system that is already inundated with alleged offenders."

"Bad things happen to youth who undeservingly end up in the juvenile justice system," Bedi continued. "At best, they'll be surrounded by more sophisticated youth who can teach them the tricks of the delinquency trade. At worst, such a child will be subject to the horrific abuses, medical and educational neglect that are inherent in Mississippi's juvenile-justice facilities."

'No Discernible Effect on Juvenile Crime'

The California-based Center on Juvenile and Criminal Justice is one of many organizations that have concluded that there is no evidence for the belief that curfews laws are effective.

"The current available data provides no basis to the belief that curfew laws are an effective way for communities to prevent youth crime and keep young people safe. On virtually every measure, no discernible effect on juvenile crime was observed," it reported. "In fact, in many jurisdictions, serious juvenile crime increased at the very time officials were toting the crime reduction effects of strict curfew enforcement."

That report emphasized that youth curfews are often popular with politicians. "Curfews also may be regarded as a 'panacea' approach to juvenile crime. Panacea approaches, especially those perceived to entail little cost, usually have been found satisfying to proponents but wanting in terms of effect," the report warned.

In another study, researcher Kenneth Adams said the primary basis for curfew support is the conviction that curfews reduce crime and make the streets safer. "However, research fails to support this hypothesis," he said.

Curfews, imposed on and off since the turn of the last century, tend to receive increased attention when there is a perceived need for more stringent efforts at social control, the federal Office of Juvenile Justice and Delinquency Prevention said in a report. It explained that curfews can have the effect of merely changing the time for perpetrating crimes.

"[D]iminished incidence of youth misbehavior while under curfew was accompanied by an observable increase in criminal activity between 2 and 4 p.m," it reported about a youth curfew imposed in Detroit, Mich., in the summer of 1976. "Thus, it appears as if youth misconduct was merely displaced to time periods when the curfew ordinance was not in effect."