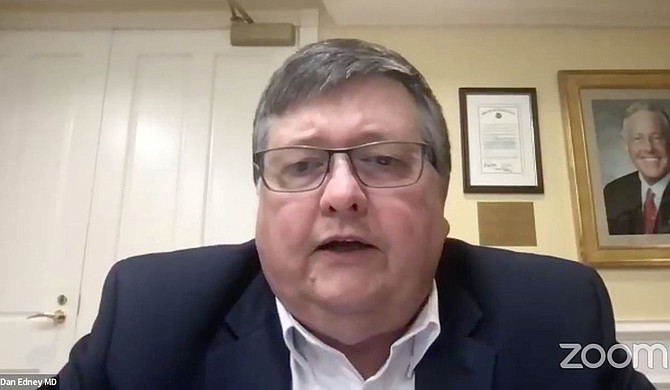 As the United States marked the grim record of 800,000 deaths due to COVID-19, state health leadership and physicians attended a Dec. 14 Mississippi State Medical Association virtual town hall to speak to concerns patients raised about COVID-19 and vaccines with their physicians across the state.

Mississippi State Department of Health Chief Medical Officer Dr. Daniel Edney confirmed that MSDH has now identified a second case of the new omicron variant in the state. The more contagious variant continues to gain ground across the country, now comprising almost 3% of total U.S. infections and even higher percentages in some states.

While United Kingdom health officials have reported one omicron-linked death, no deaths due to omicron have yet been reported in the United States, providing hope to some that the new variant may be less deadly than delta, yet at the same time out-compete it to become the more dominant COVID-19 strain.

The town hall attendees also spoke on specific vaccine-related concerns, including whether COVID-19 vaccines are safe for pregnant women to receive.

“There is no evidence to support that the (vaccine) causes infertility,” Dr. Michelle Owens, maternal-fetal medicine fellowship director at the University of Mississippi Medical Center, said during the town hall.

On the other hand, Owens noted, COVID-19 does increase risks to pregnancy.

“Their physiology is different,” Owens said of mothers-to-be. “The way that their bodies work are different as they are building another human being inside of them, and so all of those things make vaccination and appropriate precautions especially important.”

Dr. Theresa Roberts of Laurel, Miss., concurred on the safety and efficacy of vaccines for pregnant women.

“There's a set of robust data for every specific scientific question that people have concerns about, proving the safety of the vaccine,” Roberts said.

“As far as the data as it pertains to infertility, that got started by a hypothetical situation that was proposed on the internet,” Owens said. “There is no data to support—with all of these vaccines that have been given—no data to support the unrealistic claim that that’s actually what happens.”

Owens cautioned patients to consult a trusted local physician, rather than internet sources they find on their own.

“You don't have to wander through Facebook or the internet trying to figure out what's good information or bad information, but whatever you come across, take it to somebody who you trust who at least has a background to be able to speak to you intelligently about what that means and to help interpret it and kind of help you navigate the things that matter the most to you,” Owens said.

“The important thing is to understand if you haven't gotten a shot or you think about getting the shot, there are no fetal cells period,” he said.

Many modern medicines and vaccines contain fetal cell lines tracing back to the 1970s, and all are developed in laboratories.

“Most likely if you've taken any medication, especially chemotherapy or any type of biologic agent for rheumatoid arthritis or other vaccines, the many medications, vaccines, other drugs use the fetal cell lines as part of their research and development, but there are no aborted fetal cells in the vaccines,” Edney said.

Edney also spoke on the matter from a more personal point of view.

“As someone who cares about that issue, I have had no hesitation in myself or my family being vaccinated,” Edney said. “From a religious standpoint I don't have any conflict understanding how these fetal cells were developed in the 1970s and continued to be used for good, for medical research, and again nothing in the vaccine itself.”

Edney urged Mississippians not to be complacent in the midst of the still-ongoing pandemic, as deaths from the virus drop from record highs seen in the fall of 2021.

“If we had a sniper on the loose around the state shooting five Mississippians, we would do something about it,” Edney said. “We cannot become calloused to the number of deaths that we're just seeing every day. These are real people, real families, and we all need to get through this together.”