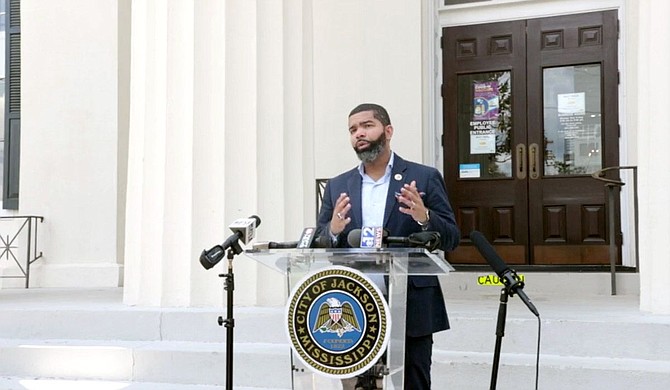 Mayor Chokwe A. Lumumba gave his rationale for the vaccine mandates for City employees at a press briefing on Thursday, Aug. 12, 2021. Photo courtesy City of Jackson

A City of Jackson worker describes Mayor Chokwe A. Lumumba’s COVID-19 vaccine mandate for municipal members as a unique measure in peculiar times. The mayor signed the executive order Wednesday, requiring all City workers to produce proof by Aug. 31 of receiving at least one vaccine dose or a negative COVID-19 test result once a week on their dime. If they miss the deadline, they risk termination.

"The mandate is a mandate; we have to abide by it; there is nothing we can do about it. People who don't have it, they've got to get it. The people who do have it, all they've got to do is show a card," the City worker, who has received the COVID-19 vaccine, said via phone on Friday, Aug. 13. "It is what it is, bro—crazy times."

"I think that the intention is to limit the spread and to limit infections; that's the only reason why this mandate is in place," he added. The worker asked to be unnamed as he is speaking in his personal capacity.

The mayor defended the measure Thursday at a press briefing, saying that the City's COVID-19 task force decided it was the right decision after careful consideration. The city attorney's office examined the move's constitutionality.

"With the escalating COVID numbers in our city, with challenges of transmissibility of the virus within city departments, we felt alongside the COVID task force that this was a prudent and necessary move for the City to make," the mayor said.

Lumumba said the executive order provides for reasonable case-by-case accommodation for religious or medical reasons. The order also requires those who have had one dose of two-dose vaccines to get the second one within 30 days of receiving the first one.

"We're covering all grounds on this to ensure that we not only keep City employees, City facilities, but the public in which City employees interface with, safe, and that is what has precipitated this particular executive order," Lumumba added at the press briefing. City employees number about 1,500.

The Mississippi Department of Health website shows that Hinds County has an 18.8% positivity rate putting it in a red zone, having recorded 24,369 confirmed cases and 446 deaths by July 31. The department encourages those who test positive for the virus to ask their doctors for monoclonal antibody treatment to lower risk of severe illness or hospitalization. It also provides locations where free vaccination is available.

The mayor described the COVID-19 infection rate as being as high as ever in the capital city, with increasing positive cases and hospitalization rates and no ICU capacity in local hospitals. "And we want to make certain that we are protecting people, and the Delta variant has posed a significant or an increased threat to our population," he said. "And so we have to take serious measures to make certain that we do everything to protect our residents."

"What we're seeing is a pandemic amongst the unvaccinated, and that is why we're trying to encourage and promote all measures to ensure and lead to not only the City employees but being a model to other businesses across the city to adopt a similar policy."