Matt Corral and the State of SEC Quarterbacks this Season 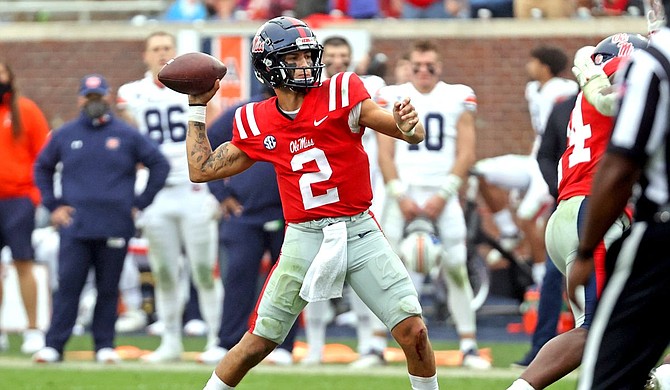 Corral is regarded as the best returning quarterback in the SEC heading into the season. Corral started all 10 games last season as he completed 70% of his passes for 3,337 yards with 29 touchdowns.

Corral is on the watchlist for the O’Brien Award, Maxwell Award and The Walter Camp Award. He is a Preseason All-American who finished in the top 11 nationally in several categories.

Most of the rest of the SEC is in flux at quarterback. Texas A&M University is starting a new quarterback after the departure of Kellen Mond as the offense turns to Haynes King to take over under center.

Mississippi State University hopes Will Rogers will develop into the starter for head coach Mike Leach. Rogers showed flashes of potential last season but not enough to keep the Bulldogs from a disappointing overall performance.

The University of Alabama is starting Bryce Young at quarterback this season. The defending national champion's biggest unknown is at quarterback after Young saw little time backing up Mac Jones.

Auburn University returns Bo Nix at quarterback but the former five-star hasn’t set the world on fire yet. The play of Nix will go a long way to helping out new head coach Bryan Harsin be successful in his first season on The Plains.

The University of Arkansas was one of the surprises of the 2020 season. The Razorbacks were one of the most improved teams in the SEC. Arkansas returns K.J. Jefferson, who still has to develop to be one of the top quarterbacks in the SEC.

Corral and the Rebels begin the 2021 season at a neutral site game against the University of Louisville in Atlanta, Ga., on Monday, Sept. 6. The kickoff is at 7 p.m. with ESPN broadcasting the game.