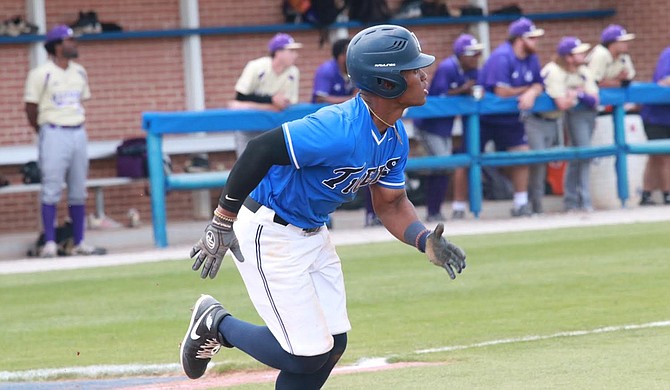 Jackson State University has clearly established itself as the class of Southwestern Conference in baseball. The Tigers are perfect in conference play with a 18-0 record and 24-8 overall.

The Tigers have owned the rest of the conference and are just two more series away from finishing the regular season undefeated. Only Alabama A&M University and Mississippi Valley State University have a chance to derail the Tigers pursuit of perfection in SWAC games.

JSU has a rising star in sophomore utility man Ty Hill. He has been on a tear this April as he and the rest of the Tigers dominate the conference.

Last weekend against JSU’s main rival Alcorn State University, Hill produced in each game of the series. In game one he went 2-for-4 with two RBI and a run scored in a 10-0 JSU win.

In game two Hill once again went 2-for-4 at the plate with three runs scored, a double and a walk. His play helped JSU hold on for the 6-4 victory and chance at a sweep in the third game.

JSU blanked Alcorn State 11-0 in the series finale to sweep the Braves for the season. Hil went 2-3 at the plate with two runs scored, two RBI, a triple and a walk.

The sophomore enjoyed a good series against Alabama State in the next series. He went 2-for-3 at the plate with three RIB one run scored and a walk as JSU won 8-3.

In game two, he went 2-for-5 at the plate with just a run scored. The Tigers won as Hill scored on a wild pitch for the 9-8 victory. He struggled in the series final as he went 1-for-5 with just a RBI as JSU won 4-2 to complete the sweep.

Against MVSU Hill went 1-for-3 at the plate in game one versus with two walks and two runs scored. JSU easily collected the 12-3 win to start the series.

The Saltillo, Miss., native went 2-for-4 at bat in game two as he scored two runs, one RBI, stole a base, a home run and a walk. Jackson State blanked MVSU 9-0 to win the series and a chance to go for the sweep.

In the third game, Hill went 3-4 with his bat and collected five RBI, two runs scored, one double, and drew a walk. JSU pounded the Delta Devils for a 13-1 win to sweep the series.

Hill was named SWAC co-Hitter of the Week for his efforts. He went 6-for-11 at the plate with six runs scored, six RBI, four walks, a stolen base, a double and a home run.

Against Alabama State in the next series, Hill put up solid numbers. He went 2-for-3 at bat in game one with three RBI, one run scored and a walk as JSU won 8-3.

In the SWAC, Hill is second in slugging percentage and third in batting average. He is tied for second place in triples, fifth in RBI and sixth in doubles. He is eight in hits and ninth in on base percentage.

Jackson State and Hill return to action this weekend as the Tigers host Alabama A&M University. The three game series starts on Friday, April 30, and ends on Sunday, May 2, as the Tigers look to stay undefeated in SWAC play.