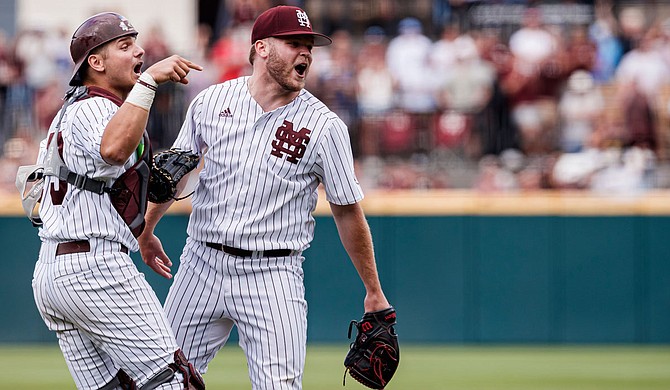 Mississippi State University faced a major matchup against archrival University of Mississippi last weekend. Going into the series, MSU was looking up to UM in the standings as the Bulldogs sat third in the Southeastern Conference West standings.

In game one with the Bulldogs clinging to a 3-2 lead in the top of the eighth inning. MSU brought in right handed pitcher Landon Sims. He didn’t have much trouble in the inning.

Sims came out in the top of the ninth looking to close out the game and earn the save for the Bulldogs. Things started rocky as Sims gave up a leadoff double to start the inning.

An unassisted double-play got Sims out of any potential early jam. Sims struck out the next batter to end the game and give MSU a 5-2 victory. It was the fourth save of the season for Sims.

In game two, Sims wasn’t needed as the Rebels jumped out to a big lead early and the Bulldogs couldn’t muster any offense. UM blanked MSU 9-0 to even the series at one game a piece.

Game three saw an offensive explosion as the game headed to the ninth inning with MSU leading 7-5. Sims entered in the top of the ninth looking to close out the game and give the Bulldogs the series win.

Sims stuck out the lead off batter for the first out in the inning. He got the second batter to fly out to left center for the second out. The third batter reached on an error to give the Rebels a baserunner.

Sims closed the door and ended the game with ground out as the Bulldogs won the game and the series. It was the fifth save of the season for Sims. MSU went from third in the SEC West to second behind the University of Arkansas.

Against the Rebels, Sims struck out four, gave up one hit and didn’t allow any runs to score. His efforts earned him SEC Newcomer of the Week honors.

This season Sims has made 11 appearances with two wins and a team leading five saves on the season. He has a 0.37 ERA in 24 1/3 innings of work giving up just 11 hits, four doubles, seven walks and one run.

The series victory over the Rebels moved the Bulldogs up to No. 2 in the Baseball America Top 25 poll. MSU stayed at No. 4 in the USA Today, Collegiate Baseball and D1Baseball.com Top 25 polls.

MSU faces a tough text this weekend as they travel to Nashville to take on Vanderbilt University. The Commodores are ranked No. 2 in every poll but the Baseball America poll in which they are No. 3.