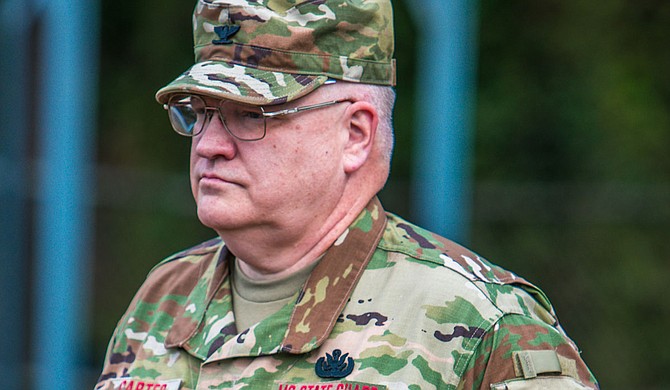 Col. John B. Carter will be inducted as the next Commander of the Mississippi State Guard on April 24 at a ceremony at Camp Shelby. Colonel Carter has been with the MSSG since 2016 and has been the Chief of Staff for the MSSG since January 2019.

Carter attended Jacksonville State University in Jacksonville, Ala., and graduated in 1985 with a bachelor's degree in history. While in school, Carter was involved in ROTC and began his own military career after graduating from college. He served active duty in Europe as a field artillery officer until 1989, when he transitioned to the Army Reserve. He volunteered and served during Desert Shield/Desert Storm with the 2-114th Field Artillery, 155th Separate Armored Brigade, MSARNG.

Col. Carter has served in two other state guards. His wife, an Air Force flight surgeon, was posted to Eielson AFB near Fairbanks, and he joined the Alaska Territorial Guard where he commanded an MP Battalion. Later, when his wife was transferred to Andrews Air Force Base in Maryland, John joined the Maryland Defense Force where he worked in the Operations Center of the Brigade. In Maryland he was activated as part of Maryland's response to hurricanes Irene and Sandy and following two major snowstorms. When Carter and his family returned to Alabama, he still wanted to serve, but Alabama does not have a State Guard. "I was in discussions with Tennessee, Georgia and Mississippi (about joining their Guard), and Mississippi seemed like the best fit."

According to Colonel Carter, the MSSG is made up of people from "all backgrounds, all experiences. We have some members who are former veterans, former military service members, some retirees from the military. We also have a lot of civilians who never served in the military, because they never had a chance, just because of the way things worked out in their life, who wanted to serve, and this is a way that they can serve at the state level to help when things are needed for disasters or whatever. That is the reason most people join, because they want to serve, and they don't have the time or the ability or whatever to be able to serve in the National Guard."

The authorization of the MSSG came about in 1941 after the National Guard had been activated for Federal service and there was a need to replace them. All States and Puerto Rico, the District of Columbia, and some other territories are authorized to have a State Guard. Carter says that there are "18 active Guard units with six more in various degrees of formation. Each state sets up their own guard for their own needs, based on what their National Guard capabilities are and what holes or additional support they may require. In Alaska they were MPs, in Maryland we had engineers and medical, and in Mississippi we have MPs, a few engineers and signal corps."

Carter has also earned a bachelor's degree in computer science and a MSM in Management Information Systems, and he works remotely as a systems engineering and technical assistance contractor in support of U.S. Army programs. He lives in Huntsville, Ala., with his wife Cheryl, who is a retired Air Force Flight Surgeon, and their 11-year-old daughter.