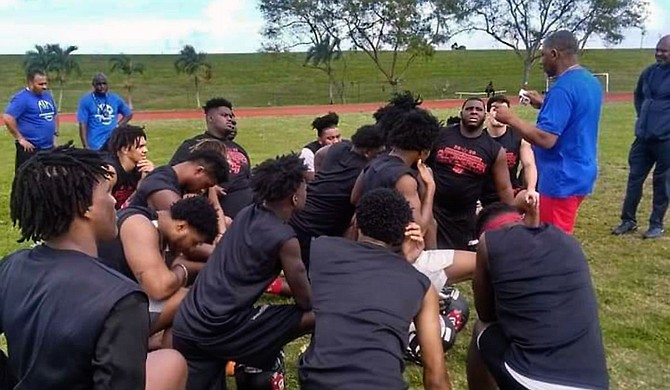 In mid-August, Jackson Public Schools cancelled fall sports including high-school football, meaning that players would be on their own as they tried to seek opportunities at playing college football.

Players who had offers to play at the Football Bowl Subdivision may not have as much to worry about, but what about those players who were expecting a jump to big-time college football or any type of college career?

No season meant no chance to impress recruiters at any level. Those players would be lost in the shuffle. They did have a few perks to not having a season. Those players could get in the weight room and build mass and get in the classroom and get grades up to play at the next level.

One perk not not often mentioned is that the JPS players will not have a season of football taking tolls on their bodies. They can rest and simply workout and increase their performance in the classroom. But where would an opportunity come from to get that next chance of playing further?

Grant Worsley and Daryl Jones combined forces to put together the JSP Football Showcase. The duo has several coaches from around the country coming to the capital city to provide transparency and give outside evaluations of all JPS talent.

Worsely has conducted several camps before, including the Jackson Combine. That combine brought scouts from the Canadian Football League and area leagues to look at talent from around the state and nation.

Multiple players each year signed with arena or CFL teams out of the combine. Using his vast connections, Worsley has brought a solid group of coaches to help evaluate players.

Katari Donald is the head coach of Memphis East High School, with 23 years of coaching experience. He played college football at Tennessee State University and University of Tennessee Martin.

Richard Gilliam is a defensive coordinator and defensive-backs and wide-receivers coach. He played college football at Alcorn State University and began his coaching career at Bethel University.

Roberth Redmond is a quarterback and defensive-back coach with 11 years of coaching experience. He played at Lambuth University and has coached high school to arena football during his time as a coach.

Javonte Kelly coaches linebackers and has been invited to camps at the Alliance of American and XFL camps. He played college football at Lane College.

The event is open to all Jackson Public High School seniors and is at no charge on Saturday, Sept. 26. Check-in begins 10 a.m. before players start getting measured and timed before position drills start.

“This is a great opportunity to give back and help players who might miss out on playing college football” Worsley explains. “Tim Williams at Provine High School, Jeremy Jones at Forest Hill High, along with all the JPS coaches have done a great job keeping their kids working out and ready to showcase their talent.”

Scott and Simpson county schools have even expressed interest in hosting another event if the JPS Showcase is a hit. Social distancing and all state and local guidelines will be followed for the event to make it safe for players, coaches and scouts.

Any JPS players interested in participating in the showcase should email Daryl Jones at [email protected] to learn more about the event.