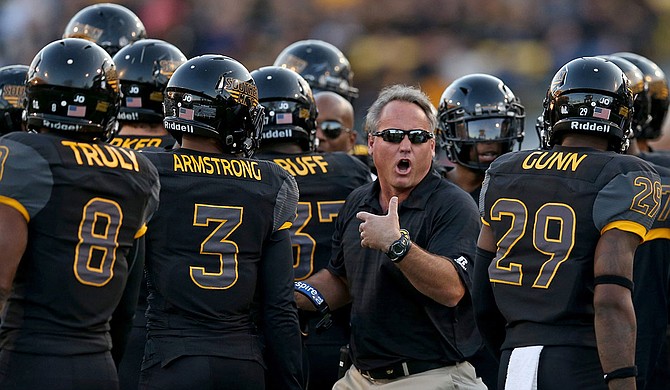 As many of us have suspected, the 2020 college football season has been a strange one. Brigham Young University is the farthest team from the west playing, and football is not going to be played north of West Virginia. Meanwhile, after only one week of games, a coaching change has already occurred in Mississippi.

University of Southern Mississippi head coach Jay Hopson resigned after his team lost the season opener to the University of South Alabama. The Jaguars’ 32-21 victory happened to be the first road win for USA since 2017. The loss for USM was the fourth straight dating back to last season.

Hopson spent four seasons at USM and was beginning his fifth season before he left the program. The coach never posted a losing record but never won more than eight games in a season.

USM hired Hopson after he revived the program at Alcorn State University. Hopson turned the Braves into one of the best teams in the SWAC. He left plenty of talent for current ASU head coach Fred McNair to keep building on that success.

Hopson came to USM in 2016 and went 7-6 in his first season, which included his only bowl win during his tenure, at the New Orleans Bowl. The Golden Eagles’ future looked bright after that first season, and things seemed to be heading in the right direction.

The 2017 season showed more promise for USM as the program finished with an 8-5 record. Hopson could not get a ninth win after losing the Independence Bowl.

USM took a step back in 2018 as the program went 6-5 and the early momentum of Hopson’s early seasons seemed to be running out. The Golden Eagles failed to reach a bowl game after the 2018 season, which led to the only time Hopson missed the postseason.

Things got a little better for USM in 2019 as the program returned to the postseason. Still, USM went 7-6, and the season ended with a loss in the Armed Forces Bowl. But Hopson was returning for the 2020 season.

It was a disastrous season opener for USM. The Golden Eagles defense was gashed for 526 yards of total offense and allowed 7-of-13 third-down conversions and 2-for-2 fourth-down conversions for the Jaguars.

USM fell into a quick 13-0 hole but cut the deficit to 13-10 at the half. That is the closest the Golden Eagles would get to catching the Jaguars all night.

By and large, the Golden Eagles did not seem prepared and ready to play. The offense sputtered and the defense could not tackle or cover receivers.

In his time with USM, Hopson happened to be pretty successful at home despite the loss to USA. In 24 home games under Hopson, USM went 16-8, counting the loss to the Jaguars.

Games played on the road were another story for USM under Hopson. Southern Miss went 11-13 in 24 games away from home. A few more road wins might have provided Hopson some extra protection even with the loss in the 2020 season opener.

Overall, Hopson posted a 28-23 overall record during his time at USM, including his lone bowl win with two bowl losses as well as the loss to USA that ended his time with the Golden Eagles.

Southern Miss named co-offensive coordinator Scotty Walden interim head coach. A search for a new coach is already underway, but Walden could keep the job if he can turn things around.