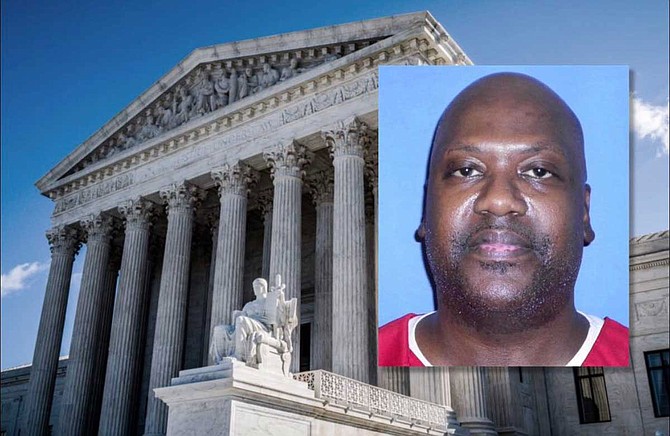 Twenty-three and a half years after his arrest, and after an unprecedented series of six trials, the prosecution of Curtis Flowers finally came to an end today with the dismissal of the murder charges against him in this case from Winona, Mississippi that has garnered national attention. Photo courtesy MDOC

(September 4, 2020) Twenty-three and a half years after his arrest, and after an unprecedented series of six trials, the prosecution of Curtis Flowers finally came to an end today with the dismissal of the murder charges against him in this case from Winona, Mississippi that has garnered national attention.

Flowers, who was released on bail in December after nearly twenty-three years in prison, was relieved the case is finally over: “Today, I am finally free from the injustice that left me locked in a box for nearly twenty three years,” said Flowers. “I’ve been asked if I ever thought this day would come. I have been blessed with a family that never gave up on me and with them by my side, I knew it would.” (Mr. Flowers’ complete statement, along with the statement of his family, can be accessed below).

Mississippi Attorney General Lynn Fitch filed a motion to dismiss the charges after lawyers in her office spent several months reviewing the evidence and the history of the case. Fitch’s office was appointed after the District Attorney who prosecuted the case since the beginning, Doug Evans, withdrew in January in the face of a motion by Flowers’ lawyers to remove him in light of his documented history of misconduct and his pattern of racial discrimination in jury selection over the six trials. Judge Joseph Loper, who presided over the fifth and sixth trials and who granted bail to Flowers in December, granted the Attorney General’s motion to dismiss the case.

“The case against Curtis Flowers never made sense,” said Flowers’ attorney, Rob McDuff of the Mississippi Center for Justice. “He was 26 years old with no criminal record and nothing in his history to suggest he would commit a crime like this. As time went by, even more evidence emerged to corroborate his innocence. This prosecution was flawed from the beginning and was tainted throughout by racial discrimination. It should never have occurred and lasted far too long, but we are glad it is finally over.”

Flowers’ defense team expressed appreciation for the Attorney General’s thorough review. “Once Attorney General Fitch was given responsibility for this case, her office did the right thing by conducting a thorough review of the evidence, including the significant evidence of innocence, correctly concluding that this case should come to an end,” said Tucker Carrington of the Mississippi Innocence Project, which has represented Flowers since 2015.

The dismissal comes at a time when worldwide protests over police killings of Black people have highlighted the role racial discrimination plays in the American system of justice: "Today’s dismissal, along with the Supreme Court decision in Curtis Flowers' appeal last year, vindicates one innocent Black American, a gentleman of immense character,” said Flowers’ co-counsel Henderson Hill of Charlotte NC. “It also adds one more important proof that one hundred and forty five years after the Civil Rights Act of 1875, a recalcitrant demagogue will no longer be able to stop the forces of transformation in Mississippi and nationally, calling for racial equity to replace white supremacy as our justice system's organizing principle.",

Much of the evidence of innocence that emerged in recent years, including witness recantations and alternative suspects more likely than Flowers to have committed these murders, stemmed from the investigative reporting of American Public Media for its podcast series In the Dark which brought national attention to the Flowers case.

The rest of the new evidence was discovered by the legal team that has represented Flowers at various stages since the sixth trial. That team includes the Hogan Lovells law firm, the Mississippi Innocence Project, and the Cornell Law School Capital Punishment Clinic. McDuff of the Mississippi Center for Justice and Hill of Charlotte NC joined the team and represented Flowers in the Montgomery County Circuit Court when the case was sent back in 2019 for a potential seventh trial.

Sheri Johnson and Keir Weyble of Cornell Law School, who took on Flowers’ case not long after his sixth trial, handled his appeals to the Mississippi Supreme Court, and later won reversal of his conviction in the Supreme Court of the United States, said: “Curtis Flowers never should have been prosecuted, let alone forced to stand trial six times. The prosecution’s indifference to his innocence and willingness to discriminate in jury selection kept him wrongly incarcerated for more than two decades. Mr. Flowers can never get back the years he lost, but we rejoice with him and his family that he has been vindicated and is finally free.”

In 2015, in the midst of that appeal, the Hogan Lovells law firm and the Mississippi Innocence Project also began representing Flowers in order to re-investigate the case and file a post-conviction petition as the next legal step in the event the appeal was unsuccessful.

Jonathan Abram of Hogan Lovells said, “Today an innocent man was finally freed. But as we celebrate a tremendous result, we must not forget the profound injustice of this case: Curtis served over 23 years for a crime he did not commit. And Curtis spent those 23 years away from his family because of the recalcitrance of a prosecutor adjudicated to have engaged in egregious misconduct in four separate trials.”

The case was sparked by the murders of four people at the Tardy Furniture Store in Winona on July 16, 1996. Flowers was arrested approximately six months later.

Each of the convictions and deaths sentences in the first three trials was overturned by the Mississippi Supreme Court for prosecutorial misconduct, including racial discrimination by the prosecutor in jury selection in the third trial. The fourth and fifth trials ended in hung juries. The conviction and death sentence in the sixth trial also was overturned, this time by the United States Supreme Court in June of 2019, due to what the Supreme Court called Evans’ “relentless, determined effort to rid the jury of black individuals” over the course of the various trials.

After the case was sent back to the Circuit Court of Montgomery County, Mississippi for a potential seventh trial, Flowers’ lawyers filed a motion for bail, a motion to dismiss the charges, and a motion to recuse Evans. The motion for bail cited Flowers’ absence of a criminal record, his peaceful nature as confirmed by a spotless prison record in the 23 years since his arrest, the recantations of prosecution witnesses since the last trial, and new evidence of alternative suspects who were much more likely than Flowers to have committed these murders. As stated by Judge Joseph Loper when he released Flowers on bail in December, “In the next trial, should one occur, the State of Mississippi is faced with the prospect of having to present a far weaker case to the jury than it’s had in the past.”

“First let me thank my Lord & Savior Jesus Christ. Father, as I stood and continue to stand on your Word, you are faithful. Thank you for your protection, your comfort, your guidance and providing for me. I will only worship and praise you.

Today, I am finally free from the injustice that left me locked in a box for twenty three years. I want to say that I believe there are other men, men that I met on the row, whose cases deserve to be heard and considered. I’ve been asked if I ever thought this day would come. I have been blessed with a family that never gave up on me and with them by my side, I knew it would. With their love, staying in the word of God, with the determination of my legal team, and the countless letters and words from my supporters, the day I’ve prayed for is here at last.

I want to thank some people very important to me. First and foremost, thank you to my parents. Mom and Dad, you have done everything and more for me during this season. You are an example of Christ’s love – actions not words. Mom, I hope you are taking a minute to smile down on me.

To my Family – Archie, Felicia, Angela, Priscilla, Charita – my sisters and brothers! You are my rock, my firm foundation. Thank you for everything; especially your prayers, love and support!

I want to thank all of the lawyers who believed in my innocence and have worked for my freedom for many years. And I am especially grateful to Ashley Johnson, who was part of my legal team, and has been extraordinarily helpful and kind to me and my family.

Finally – Matt and Lilly – your love and support changed my life. Some people come into our lives for a season and some for a lifetime. You two are lifetime friends. I thank God for you both.

Today is a great day! Thank you Lord for hearing my prayers and the prayers of many.”

“We are so happy and blessed that the weight of this case has finally been lifted from Curtis’ shoulders. We have prayed for this day and are looking forward to the future knowing that our brother will not be going back to prison. We know our Mom is looking down and our only wish is that she could have been here to welcome Curtis home. We ask for everyone to respect our wish for privacy and time to reconnect and look forward to talking more soon. Thank you all for your love, prayer and support.”