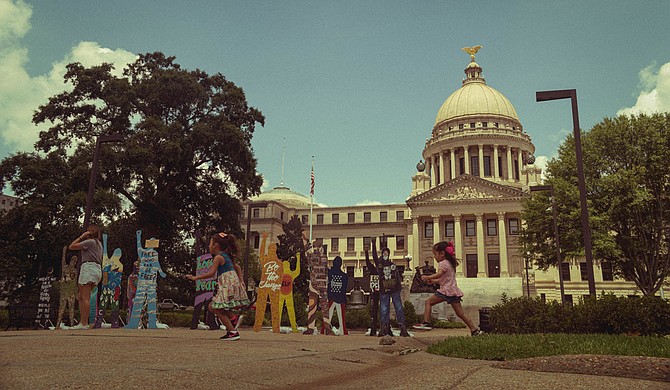 Local artist Eli Childers organized the “Constant” exhibit, a collection of 18 life-sized, wooden “protestors” created in collaboration with other creatives in the area to serve as a protest against racial injustice across the nation. Photo courtesy Blake Wing

Soon after the death of George Floyd, Eli Childers felt moved to make a statement. Viewing the incident on national television and watching the country's divided reaction to it both awed and disturbed him. He felt a burning need to creatively display his feelings about the grief and emotions that people were experiencing since Floyd was killed.

"For me, I hate to see people hurting," he said. "I felt like God put it on my heart to do this visual art." 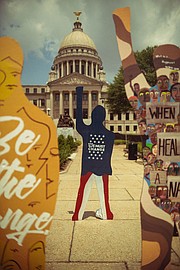 From left, art by Shon Perryman, Will Brooks and Anna Wolfe.

As protests erupted around the country, the self-taught artist and sculptor envisioned an art exhibit that highlighted truths about love, togetherness and unity. His vision was a demonstration that would continue the movement once the streets had emptied.

He titled it "Constant."

"We are constant in how we feel. Even though these figures may be temporary, all things in life are temporary," Childers said. "Our feelings about these social injustices do not change. These are constant things."

A brass plaque attached to the forehead of one of the silhouettes that Childers created describes the work as "a Mississippi collaborative visual art peaceful protest created by local artists to speak out against all forms of racism, violence, abuse and oppression suffered by people of color in America. An installation of hope and a call for change."

The messages are clear and powerful. Chris Mitchell's figure depicts a person whose camouflage clothing is littered with Skittles, cigarettes, cell phones, licenses to carry weapons, DVDs and more—all items that led to the death of Black people. The message states, "None of these are reasons to be killed." Another by Shon Perryman features a collection of abstract faces. Across the front in large script are the words "Be the Change." Azha Sanders's piece is an all-black silhouette with the message "Love is an antidote to Fear." 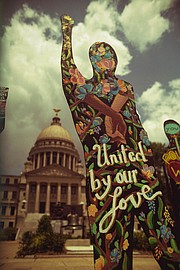 After the Mississippi Museum of Art declined to provide an exhibit space, Childers sought to find a place where the demonstration could have the most impact. After a few phone calls and visits, he chose to display the exhibition at locations central to the state's highest leadership.

The "protest" was installed on Aug. 17 at the Mississippi State Capitol and again on Aug. 18 at the Governor's Mansion. Artists then dismantled the display and placed the pieces individually on street corners throughout downtown Jackson. Photographs of the work is available on Facebook at Art by Eli.

"We (put) them all over the city so that as many people as possible could see them," Childers said.

The Greater Jackson Arts Council provided a grant for the exhibit, which drew a series of donors like Beth Herzig, the owner of Discount Trophy who  created and donated the brass plaques on the figures.

Local photographers Samantha Shea Yancey, Blake Wing and Sharon Coker photographed the installations. Childers' social-media platforms show an outpouring of appreciation and support from the artists involved. "This is our voice as local artists to say we believe and have hope for a better future,'' Childers notes on his Facebook page. "That we stand and love together. That we stand against everything wrong in our path."

Childers sees the work as an important message to and from those in the Jackson area and hopes that the work  inspires awareness and change in the hearts of those who see them.