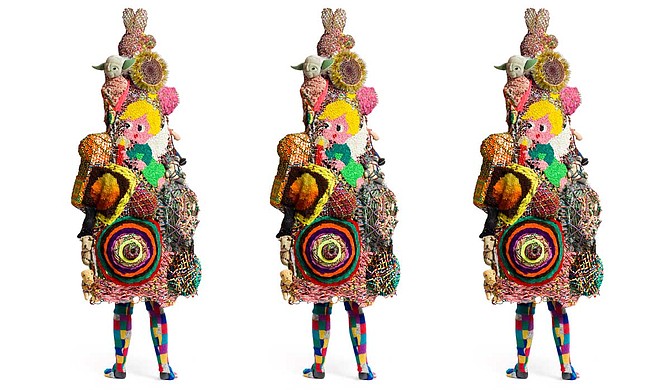 The Mississippi Museum of Art will present "Nick Cave: Feat.," a survey of the renowned Chicago-based artist's work, on view in the Donna and Jim Barksdale Galleries for Changing Exhibitions Oct. 26 through Feb. 16, 2020.

Cave is a contemporary artist whose work spans decades. He is a sculptor, painter, dancer, performance artist, video and installation artist, thereby making it hard to place him in any single category. Yet, it is this range of talent that lends itself to the message the Cave puts on display.

"Nick Cave is a multi-disciplinary African American artist that uses dance, film, theater and visual arts to deal with themes of social justice, equity, identity and the way we think about think about the materials we dispose," says Monique Davis, Director of the Center for Art & Public Exchange at the museum.

The centerpiece of the exhibit features Cave's trademark "Soundsuits." He began creating the human-shaped sculptures in 1992 to display his reaction to the Rodney King beating by a Los Angeles police officer. The artist, who felt particularly vulnerable after the incident, created the suits as a type of skin which protected the wearer from profiling through its concealment of race, gender and class. The initial work, fashioned from twigs and sticks from Chicago's Grant Park, earned its name because it made sounds when worn.

"He created them to kind of protect himself and disappear into the landscape. They were originally made of found objects, (but) now they are a little bit more ornate," Davis says.

The suits, made from common and repurposed items such as plastic buttons, beads, wire, sequins and feathers, are a concept central to Cave's call for equity and human connectivity. When static, they convey a resistance to racial profiling and gun violence. When worn by Cave and his dancers, they simultaneously act as fashion, sculpture and performance art presenting an imaginative mix of color and sound representative of a sampling of cultures, traditions and folklore.

"At one point in his artist practice, he realized that he could get inside of the soundsuit and then they became elements he used in live performances with dancers," Davis says. "As they moved through a space, they would explore the type of sound they could make."

The exhibition will include many of Cave's other mediums, including mixed-media sculptures, intricately detailed installations, video and sound projection and videos of live performances. His signature style incorporates found objects and brightly colored fabrics into art that speak to issues involving current racial tensions, especially gun violence and its impact on the black male community.

The projection "Blot" is a 42-minute and 57-second looping monochrome video. It features a dancer, amorphous, in a black soundsuit made of black raffia against a stark white background. The constantly moving figure evokes personal interpretation much like the inkblots often used in psychological testing.

Davis believes that the exhibit will appeal to both the young and old. "We thought that the themes he deals with in his exhibit would be something that would resonate with our visitors," Davis says.

Jackson Free Press Associate Publisher Kimberly Griffin will moderate a panel discussion at the museum starting at 5:30 p.m. on Oct. 24, the day before the opening.