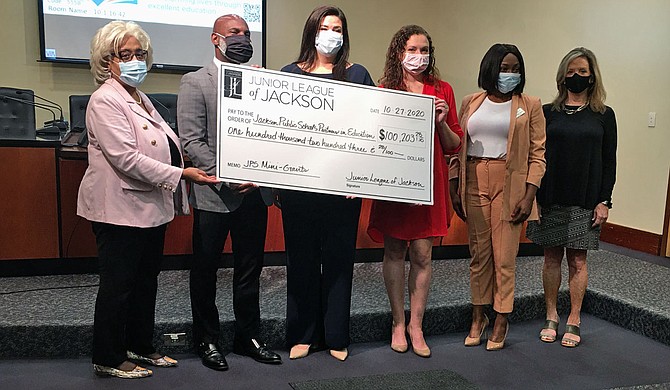 At the presentation ceremony Tuesday, Junior League of Jackson President Staci McNinch said that 41 out of 80 applicants are getting the mini-grants her organization is providing.

"Each year since 1990, the Junior League of Jackson has come together to present grants to teachers that apply, so for 30 years now we've been presenting those awards, and since 2004, we've been partnering with the Community Foundation for Mississippi to really expand the amount of money that we are able to give to those teachers," she said. "The mission of the Junior League of Jackson is to improve our community; even during a pandemic. We won't let that stop us."

"We are so thankful for our volunteers, for our community partners as well as corporate sponsors that allow that to happen year after year," she added. "The needs this year, in some cases, are even greater than they have been in the past."

"In today's environment, with the teachers having to really be creative in the way they are educating their scholars, in some cases virtually or in a distance learning situation, we just felt that it's so important to be able to present them with the funds to be able to do that at this time,” she said.

"There were a lot of different projects that were presented to us; some of the projects encouraged learning even after graduation," she said. "It does focus on giving the students skills that prepare them if they are not going directly to college; it lets them go directly to the workforce."

"There are projects that encourage reading; reading is something that is very important, especially at the younger age, so a lot of the younger projects, like from Spann Elementary School, were centered around reading, encouraging them to read."

Other areas covered by the projects include social development, fighting against childhood obesity, encouraging healthy eating, and exercising.

City of Jackson employees can take a six-hour administrative leave on Nov. 3 to vote. The city council approved an order Tuesday allowing the mayoral administration’s plan to encourage voter participation in the general election.

Mayor Chokwe A. Lumumba, who said that state law prevents him from granting a whole day off, which is his preference, said he is concerned about long lines on Election Day preventing workers from voting.

"I generally believe that Election Day should be a national holiday, and there should be no barrier for people to be able to make their voice known at the polls," he said. "But in addition, what makes this particularly necessary at this juncture is we know that lines will be long. There is concern with delays (because of) COVID and the limitation of the number of people that they may have in a particular polling place.

"And we didn't want people's need for economic stability to interfere with their need to go vote."

Ward 3 Councilman Kenneth Stokes, who joined other city council members to support the initiative, said it will relieve the workers of the pressure they may be under to combine working with voting.

"So, I think it is a step in the right direction," he said. "I would hope that all businesses will follow the lead of the City of Jackson and make time for people to go vote."

The provision also authorized the mayor to approve up to four hours in administrative leave for municipal workers on national general election days after Nov. 3.

The Jackson City Council approved the mayor’s nomination of Charles Williams as the Director of public works Tuesday. Williams has been an employee of the city for 19 years, including three years as the city engineer before his appointment. He has served as the interim public works director since the resignation of Bob Miller in July.