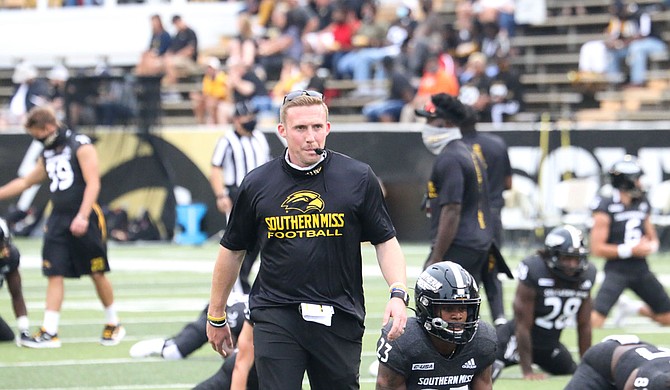 The fall 2020 season has already been tough for the University of Southern Mississippi football team. To start, head coach Jay Hopson resigned after just one game into the season. In his place, co-offensive coordinator and wide receivers coach Scotty Walden was named the interim coach after Hopson left.

Walden spent time as a head coach at East Texas Baptist University at the Division III level of college football. One of the best and youngest offensive minds in college football, Walden would have to improve the team quickly on all three phases of the game. Walden’s first outing as head coach ended with a one-point loss to Louisiana Tech University.

Things on the field got worse for Walden in his second game. The Golden Eagles were blown out by Tulane University 66-24 as the team fell to 0-3 on the season.

Walden earned his first win as head coach when USM outlasted the University of North Texas. It looked like things might be finally going to look up for the Golden Eagles after notching that win.

Then off the field the 2020 season began to run into speed bumps. The next game USM was supposed to play was against Florida Atlantic University.

That game ended up being postponed after 18 players for FAU tested positive for COVID-19. A makeup date hasn’t been announced or if the game will even be made up in this crazy season.

Southern Miss did not get to play its next game against the University of Texas at El Paso as the Golden Eagles suffered an outbreak of COVID-19. USM was without more than 20 players as the game against the Miners was postponed. Again, no make up date has been announced yet.

On Tuesday, Oct. 20, news broke that Walden had tested positive for Covid-19. The head coach is currently out against the Golden Eagles next game Liberty University.

Liberty is currently coached by former University of Mississippi head coach Hugh Freeze. He has his team off to a 5-0 start and coming off a win over Syracuse University from the Atlantic Coast Conference.

As Walden spends his time in quarantine, he will not be able to lead his team against the Flames on Saturday, Oct. 24. Walden will only be able to watch from home as his team tries to pull the upset.

USM now turns to Tim Billings, who is assistant head coach, defensive coordinator and coaches defensive backs. It will be up to Billings to keep the Golden Eagles on a winning streak after all the upheaval of the 2020 season.

The best season for Billings came in 2002 when his team finished 8-4 and he was named Ohio Valley Coach of the Year. Before coming to USM, Billings was athletic director and head coach at North Lamar High School in Paris, Texas.

Southern Miss takes on Liberty at noon this Saturday with the game on ESPN3.