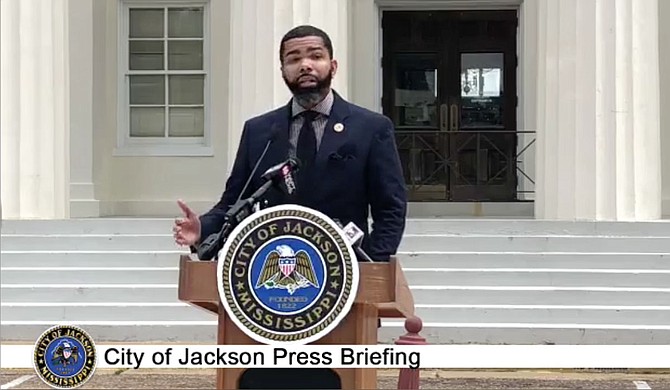 Though Mississippi’s statewide mask mandate lapsed Sept. 30 when Gov. Tate Reeves did not renew it, it is still in operation in the capital city of Jackson, Mayor Chokwe A. Lumumba said at a press conference Monday.

"I am aware that the governor recently allowed the statewide mandate to wear masks to expire, but the City of Jackson is still under a facial covering ordinance," he said.

He said the City can put in place more restrictions than what the state government declares in the public interest.

"We believe that that is important; what we know is that we still have a high number of cases that have not diminished significantly enough that we should choose not to protect ourselves," Lumumba said. "In addition to that, we know that we are on the eve of the flu season and big events like the state fair that the state is still intending to push forward, so all of that leaves us in a vulnerable state and condition that we will have to ask people to still continue to be vigilant."

Gov. Tate Reeves and State Health Officer Thomas Dobbs indicated that masks would be required at the Mississippi State Fair in Jackson, but Mississippi Agriculture Commissioner Andy Gipson contradicted them, saying they are not required.

"I want to remind people how this works from a legislative position—the governor sets the floor, but we can move beyond that, we can choose to have restrictions which we feel that is in the best interest of our residents, above that and give a little more restraint than that," the mayor said. "So we have to, at the bare minimum, do what the governor says and that sets the floor, but as we see fit, we move beyond that in the interest of our health and safety at large."

Technically, the governor has made it clear in earlier executive orders that state orders on COVID-19 safety can supersede local policies, but he has allowed municipalities like Jackson to maintain stricter orders than the state in many cases.

"We have to ask that our residents still continue to take these necessary precautions, so that we don't see an unnecessary rise in our cases and harm falls upon our city, in that way," Lumumba said.

The State fairgrounds are under the state's jurisdiction and not the city's, so the city's mask mandate does not apply there.

"When they have the gun show, we can't do anything about it … the state fairground is not considered part of the city of Jackson," Director of Communications Themba told the Jackson Free Press today.

Public Information Officer Meagan Gosa confirmed that the mask mandate operational in the City of Jackson does not hold for the state fairgrounds.

"The fairground belongs to the state, so the governor has canceled the statewide mask mandate, but the mayor hasn't canceled for the city," she said. "And so the state oversees the state property (and) Commissioner Andy Gipson has made masks optional (for the fairgrounds)."