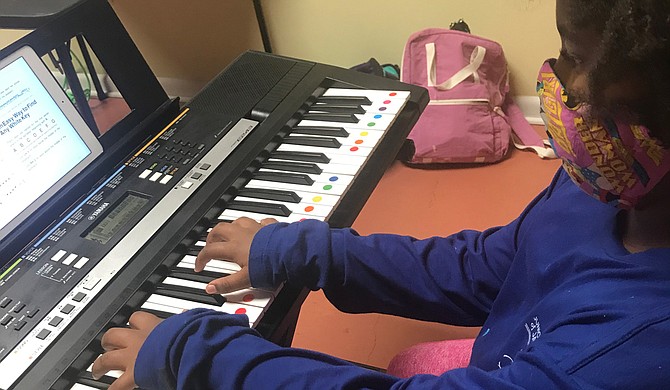 In her hometown of Pocahontas, Miss., Latongya Garner developed her affinity for music at Baker's Grove Missionary Baptist Church, where she currently serves as music minister.

"That's my stomping ground and where I learned to express myself musically," she says.

Today, Garner encourages others to polish their musical gifts—as owner and director of Garner Music Academy, a Jackson-based music education and performance business that she opened in December 2019.

While her students recognize her "Make the music happen" mantra, the Clinton resident did not originally pursue a career in music education upon graduating from Lanier High School in 1993. Enrolling in Jackson State University, Garner earned a bachelor's degree in social work in 1998 and entered the mental-health field. Outside of work, she continued to perform with bands in and around the Jackson area. Eventually, the siren's call of music beckoned, and she returned to JSU, receiving a bachelor's degree in music and vocal performance in 2008.

As she promoted her jazz shows, she also taught voice and began teaching music at Oak Forest Elementary School in South Jackson.

"It was an eye-opening experience," she says. "I got to learn classroom management, which helps me today. The classes were large, and sometimes the students who really wanted (to learn) music were distracted by students who would rather be somewhere else. (I learned) to be more creative to reach a classroom of 25 students."

Touched by the kids who really wanted to learn  music, Garner's frustration with her inability to give them the extra attention they wanted in that setting inspired her to open her company. Before taking that next step, though, she decided to attend JSU for a third time and earn a  master's degree in music education.

Garner Music Academy teaches children from pre-K to 12th grade and adults of all ages who are interested in artistic development in their musical crafts. The business' oldest client is nearly 70 years old.

"(Many adults) just want something to do, and one (of her clients) describes it as self-care, or it is something they can scratch off their bucket list—if they always wanted to learn how to play an instrument—or they may just want to keep their voices intact," she says.

Garner Music Academy currently employs two other instructors: Nellie Mack, who teaches bass guitar, and Will Brown, who teaches intermediate and advanced piano. Garner herself hopes to add instructors for strings, percussion, horns and electric guitar in the future. The academy is open for other musicians who want to share their crafts with the community, as well, she says.

While many students enroll at Garner's Music Academy to learn or polish a musical craft, Garner hopes to help prepare young students for the world.

"I seek to equip students of diverse career paths with the tools to be more professional, and I believe that the experiences should lead students to be confident, to discover their creative self, to establish accountability, to earn a sense of achievement, and to build character to become a productive citizen," Garner says.

To learn more about Garner Music Academy, visit garnermusicacademy.com or find it on Facebook.