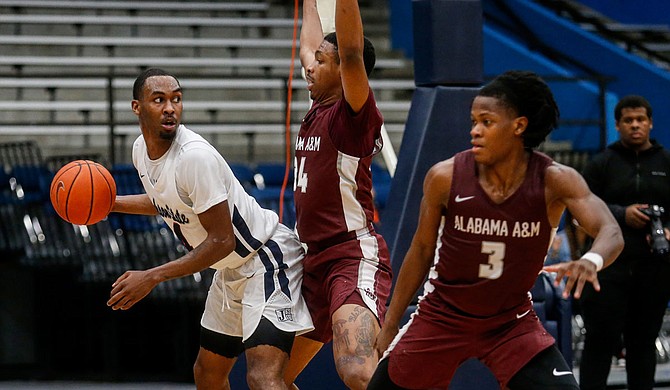 It has been a long road for Jackson State guard Tristan Jarrett to get to this point. The former All-West Tennessee Boys Basketball Player of the Year ended his time at Haywood County High School to a Region 8-AA Championship.

As a senior, the Brownville, Tenn., native averaged 21.8 points and 8.6 rebounds per game in high school. Jarrett chose to head to start his college career at Kennesaw State University but only played in 12 games and averaged 4.8 points per game before he decided to transfer.

Jarrett spent one season at Three Rivers College, a community college in Poplar Bluff, Mo. Three Rivers is where the guard blossomed as he averaged 29 points per game and led the team in scoring, rebounding, assists, steals and blocks.

While at Three Rivers, Jarrett produced 12 games where he scored 30 points and 11 games in which he produced a double-double. It wasn’t a happy ending at Three Rivers as he was dismissed from the team for violations of team rules.

Jackson State would land Jarrett and his growth as a player continued with the Tigers. He averaged 16.8 points, 3.3 rebounds and 1.8 assists while playing in 32 games. His scoring average was good for second in the SWAC as Jarrett scored 20 or more points in 11 games and enjoyed back to back 30 point games.

While it isn’t certain to happen, college basketball is going to try to play a 2020-2021 season. Each conference is gearing up to play this season with the start fastly approaching.

The SWAC is going to play this season just like most of the other conferences. Jarrett was named Preseason SWAC Player of the Year and Preseason First-Team All-SWAC.

Jarrett won’t have to do it alone this season for the Tigers. Jackson State forward Jayveous McKinnis was named Preseason SWAC Defensive Player of the Year and First-Team All-SWAC.

Last season, McKinnis led the SWAC in rebounds and blocks with 9.3 and 1.9 per game respectively. He averaged 9.5 points per game as well last season before the coronavirus shut down college basketball.

At the end of the 2019-2020 season, there might not have been a hotter team in the SWAC than Jackson State. Before the season was cancelled JSU was on a five game winning streak and had won 10 of its last 13 games.

JSU finished 11-7 in SWAC play last season and 15-17 overall. That is after starting the season 5-14 and an 0-5 losing streak to start the season. The TIgers finished in fourth place in the SWAC standings.