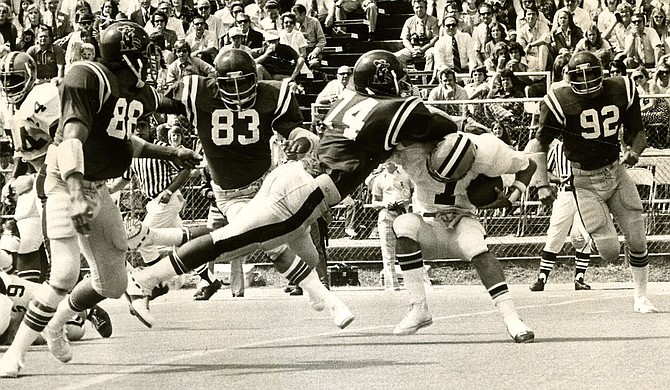 Robert Jerry “Ben” Williams Jr and James Reed made history as the first African Americans to receive a scholarship to play football at the University of Mississippi. Williams passed away from natural causes on Monday, May 18, at St Dominic Hospital in Jackson, Miss., at the age of 65.

Williams, known as “Gentle Ben” for his friendly off the field personality, was a standout athlete at Yazoo High School where he earned two letters and was the team captain in 1971. Williams captained the North Team for the 1972 Mississippi All-Star Game.

While playing for the Rebels, Williams earned a letter for four years. He still holds the school record for a season set in 1973 with 18 and as the career sack leader with 37 over his four-year career.

Williams set a career-high 116 tackles as a senior and finished his career with 377 total tackles. As a senior he participated in the 1976 Senior Bowl, Coaches Association All-American Bowl and the 1975 East-West Game.

The Buffalo Bills selected Williams in the third round with the 78th overall pick in the 1976 NFL Draft. The former Rebel spent 10 seasons playing for the Bills and played in 13 games as a rookie. He started 140 of the 147 games he played in during his NFL career.

In the strike shortened 1982 season, Williams earned the only Pro Bowl bid for his career. He finished with a then-Bills record 45.5 sacks. That record was later broken by Hall of Famer Bruce Smith.

Smith credits Williams with helping him during his rookie year of 1985, which happened to be the final season that Williams played in the NFL. He was named Top-50 All-Time Bills team for the franchise’s silver anniversary team.

After playing in the NFL, Williams returned to Jackson, Miss., and started a construction business. In 1992, Williams established the Ben Williams Minority Scholarship Endowment.