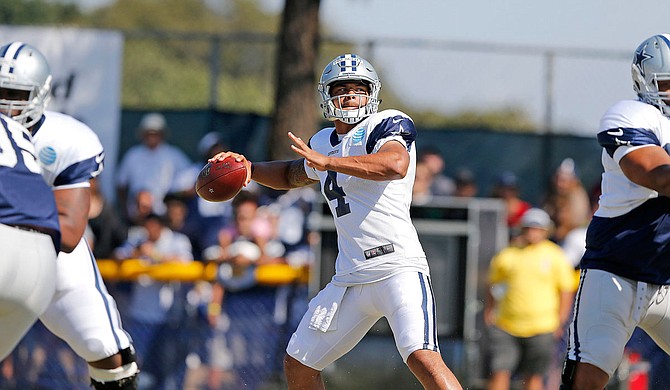 Covid-19 took little time bringing the sports world to a complete and total stop. The novel coronavirus shutdown the NBA, NHL and Major League Baseball. It ended the madness of March by cancelling the NCAA Basketball Tournaments at all divisions.

One juggernaut the virus hasn’t slowed down, though, is the NFL. The league just saw a new Collective Bargaining Agreement passed by the owners and players. Labor peace is set for the league for the next 10 years as the league gets ready to negotiate new television deals.

The league is already deep into free agency with quarterback Tom Brady leaving the New England Patriots and quarterback Drew Brees returning to the New Orleans Saints. As free agency moves along teams are getting ready for the NFL Draft this April.

The Dallas Cowboys placed the exclusive franchise tag on quarterback Dak Prescott. That means Prescott can’t talk to any other teams and that Dallas has until July 15 to try to work out a long-term deal with its young quarterback.

If Prescott and the Cowboys don’t reach a deal before the deadline, Prescott will make between $30 and $33 million next season. Both sides could end up going through the same procedure after next season if they can’t figure out a multi-year deal.

The Cowboys drafted Prescott in the fourth round with the 135th overall pick in the 2016 NFL Draft out of Mississippi State University. As a senior, Prescott took the Bulldogs to their first number-one ranking in program history and finished his career as arguably the best player in MSU history.

Prescott became the starting quarterback for one of the most iconic franchises in sports when Tony Romo was injured in a preseason game. As a rookie, Prescott threw for 3,667 yards and 23 touchdowns with just four interceptions. He added 282 yards rushing with six touchdowns on 57 carries.

In 2017 he threw for 3,324 yards with 22 touchdowns and a career-high 13 interceptions. He rushed 57 times for 357 yards and six touchdowns as well during his second season.

Prescott solidly entered his third year in the league as the starting quarterback for the Cowboys. He threw for 3,885 yards with 22 touchdowns and just eight interceptions. He rushed for 305 yards on 75 carries with six touchdowns.

Entering his contract year, Prescott put his best season together statically. He threw for a career-high 4,902 yards and a career-high 30 touchdowns with just 11 interceptions. He rushed for a career-low 277 yards on 52 carries, the lowest in his career and just two touchdowns, which is another career low for rushing.

In his four seasons, Prescott hasn’t missed a game as he has played 64 games as a quarterback. He has thrown for 15,778 yards with 97 touchdowns to just 36 interceptions. He has rushed for 1,221 yards and 21 rushing touchdowns.

COVID-19 has not stopped league business in the NFL, but it will slow down the league later this year. Team workouts could be pushed back or lost depending on how long the country stays on lockdown due to the virus.