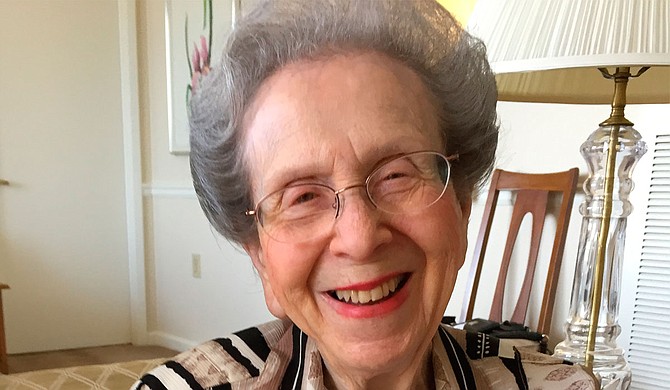 While reaching 100 years of age is a milestone that not everybody manages to achieve, today, Jackson native and long-time resident Bea Gotthelf celebrates her 100th birthday.

Gotthelf and her husband Harold had two children, Bill and Lee. Bill's best friend Don Mitchell lived on the same block and visited the Gotthelf house nearly every day.

"Bea was sort of like my second mother. I was very much a part of their family," Mitchell says, noting that he was essentially the couple's third son. "I don't have any memories of my childhood that don't include Bea."

Mitchell says that Gotthelf could be very serious and taught them right and wrong but that she also has a wonderful sense of humor and loved to cut up and spend time with the kids.

"Oh, I remember when I was a child getting up early in the morning to go fishing with Bea because she really liked fish, (and) I don't even eat fish," Mitchell laughs.

In addition to being involved with her children, Gotthelf and her sisters, Celeste and Phyllis, were very active in the Civil Rights Movement as members of The Panel of American Woman, an interfaith and interracial group of women who took it upon themselves to speak to churches, civic clubs and schools in support of public education and equal justice under the law.

"They really tried to enlighten the community that instead of revolting, they should accept and move forward with our schools and with our society because it's the right thing to do," says Macy Hart, a friend of Gotthelf. "It wasn't to win any prizes. She wasn't running for office, but she came from a family of examples like that."

Hart met Gotthelf because he and one of her sons were both in the Southern Federation of Temple Youth, or SoFTY, a regional Jewish youth group that Bea's sister Celeste helped create, but he and his wife Susan got to really know her after Macy became the first director of the URJ Henry S. Jacobs Camp in Utica, which Gotthelf and Celeste helped found in June 1970.

"She has been a lifelong mentor to both of us," Macy says. "She is so beloved in the community of Jackson—not just the Jewish community, but the community at large, because she is such a dynamic individual that came down on the side for what was right and what we should be doing, even if it was against the grain."

Macy and Susan married in 1971 and began working more closely beside Gotthelf and her sisters—whom Macy playfully calls "the three Beas" because they looked so similar—in the Jewish congregations in both Jackson and Vicksburg.

"Bea and her sisters took us in. Bea and her husband Harold—who was also a superstar and died way too young—they were like residential surrogates and friends," Macy says.

"We always said Bea was a rockstar in Jackson," Susan says. "You could go anywhere and she would run into people who would just run up to her, 'Bea! How are you doing?'"

Macy served as president of Beth Israel Congregation's executive board, of which Gotthelf was also a member.

"She didn't take any B.S.," he says. "When we would get into some of these conversations as the executive committee, if she heard something—from me, for example—about some (bad) idea, she would say, 'Don't do that. That's B.S.' She was straightforward, diplomatic, and we respected her a great deal."

Continuing a trend of civic involvement throughout her life, Gotthelf volunteered at local food pantries and worked with Stewpot until she could not write anymore and retired, although Susan says she would often insist that she is "not an old lady!"

After losing her son Lee to cancer, Gotthelf moved to Atlanta around six years ago. Macy has family and frequently has business in Atlanta, so he and Susan have visited her many times over the years.

Gotthelf never had grandchildren of her own, but she loves and has been involved with her nieces' and nephews' children, as well as the Harts' grandchildren. Macy has taken Gotthelf and his grandchildren out for ice cream, which Gotthelf loves, on a couple of occasions, and when their youngest grandchild was still a baby, the couple brought him on a visit with Gotthelf because she loves babies so much.

The Harts are actually traveling to Atlanta today to visit Gotthelf for her 100th birthday.

"Bea is quintessential to the representation of a role model," Macy says, with Susan adding, "She always had a smile on her face and a gleam in her eye. She is a happy person who embraced people and life and her family and the community."

"She is a great human being," Macy finishes.