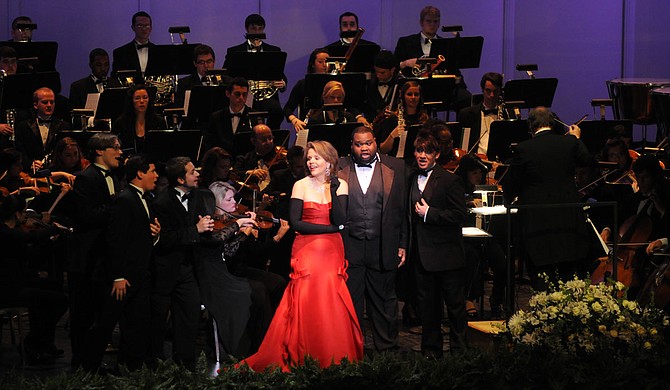 Opera Mississippi, formerly the Mississippi Opera Association, holds musical and artistic shows throughout the year and is planning to increase community involvement as part of its “The Opera Circle” program. Photo courtesy Opera Mississippi

Since its founding in 1945 as the Jackson Opera Guild, the arts organization formerly known as the Mississippi Opera Association has gone through a number of changes. On Jan. 26, 2020, the opera guild announced its latest metamorphosis—a new name, Opera Mississippi. Coinciding with the company's 75th anniversary, the shift reflects new initiatives and other developments Opera Mississippi has in store.

For starters, the organization is establishing a donor-level social program called "The Opera Circle," which will consist of "meet the artists" parties, small-group pre-show happy hours and VIP events. Some events will be open to the public. Through the program, Opera Mississippi hopes to cultivate new opera and musical stage enthusiasts by allowing attendees to more directly interact with the organization's representatives and the artists that make their way to Jackson to perform.

"We wanted to celebrate our 75th year by increasing our audience and universe of donors to a broader section of Mississippi art enthusiasts," board member and Opera Circle Program Chairwoman Shannon Warnock says about the changes. "My husband and I got involved when our son (Jay) was a student performer, and we've been impressed with the caliber of performances and professionals that Opera Mississippi produces. So we are honored to be part of the family of opera supporters in the state and encourage any others to join us as we celebrate our 75th anniversary and go forward to 75 more fantastic years."

The Opera Circle is separate from The Guild, which serves as a community for the organization's "Opera family" that aims to cultivate attendance and provide financial support for Opera Mississippi.

In addition to shows, Opera Mississippi also implements a variety of educational and community outreach programs, such as the Children's Opera, wherein the organization arranges free performances for students across the state, allowing them access to different forms of music that they might not have access to otherwise.

Another opportunity that the arts organization offers is the annual John Alexander International Vocal Competition, the only nationally advertised music competition in the state. Named after the internationally known operatic tenor who heralded from Meridian, Miss., the competition seeks to recognize talented performers of vocal opera and musical theater from across the nation. Contestants are split into student artist (ages 18-25) and young professional artist (ages 26-40) categories for the event.

First-, second- and third-place winners respectively receive $1,000, $500, and $300 monetary prizes, as well as priority consideration for roles in upcoming Opera Mississippi productions. Winners are also invited to perform during the "Stage Stars of Tomorrow" gala concert held later each year.

For more information on Opera Mississippi, its productions and its programs, visit operams.org.

American composer Dave Brubeck left his mark on the world as a pioneer of "cool jazz," a modern style characterized by relaxed tempos and lighter tone that often incorporated elements of classical music. In 1959, The Dave Brubeck Quartet released "Time Out," which included the track "Take Five," composed by quartet-member and saxophonist Paul Desmond. A hit, the song was reissued in 1961 and became the biggest-selling jazz single in history, later inducted into the Grammy Hall of Fame in 1996.

Opera Mississippi celebrates Brubeck's legacy through a production featuring his and his quartet's works, as part of this season's Cabaret at Duling Hall series. The Sam Bruton Quartet—Sam Bruton on piano, Larry Panella on saxophone, David Pellow on bass and Peter Wehner on percussion—recreates the iconic tunes surrounding "Take Five."

First performed at the Theatre Lyrique in Paris in 1867, "Romeo et Juliette" has since become a staple in the opera scene, with various theaters and arts organizations performing it multiple times around the world each year.

Created by French composer Charles Gounod as a musical adaptation of William Shakespeare's original work, the opera contains five acts and is known for the four duets the main characters perform, as well as the popular waltz song "Je veux vivre" for the soprano.

Opera Mississippi closes its 2019-2020 season with a production of Gounod's work. The titular leads are played by Cody Laun (Romeo) and Stacey Trenteseaux (Juliette). The show is on April 25, starting at 7:30 p.m., at Thalia Mara Hall (255 E. Pascagoula St.). Tickets range from $35 to $65 for general admission and from $20 to $30 for students and military with ID.