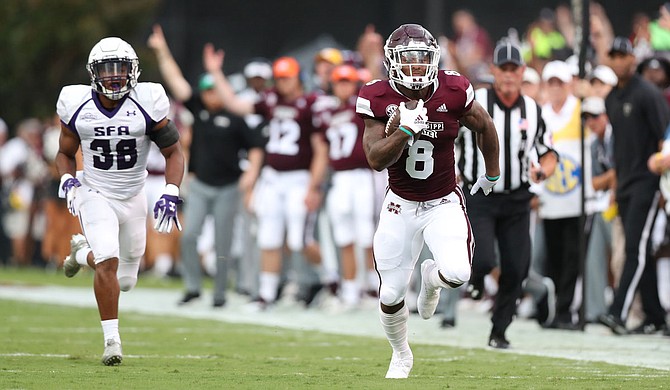 College football players are returning to their respective campuses to get ready for a possible 2020 season. At this point, no one is sure whether college football will be played due to the coronavirus or what it will look like if teams do play come fall.

One player might not play this season, and it has nothing to do with the ongoing pandemic. Current Mississippi State running back Kylin Hill took to Twitter to voice his displeasure with Gov. Tate Reeves.

On Twitter, Reeves posted opposition toward potentially changing the state flag of Mississippi. As many in our nation have come to learn as of late, our state is widely known as the last state in the U.S. to fly a flag that has Confederate imagery.

In response, Hill tweeted to Reeves: “Either change the flag or I won’t be representing this State anymore 100 & I mean that..I’m tired.” Hill is arguably one of the best players on the current MSU roster. If he doesn't play, the loss would be a major blow for the Bulldogs.

No one can claim Hill is an outsider trying to stir up trouble. The running back was born and raised in Columbus, Miss., and played high-school football at Columbus High School before entering college.

Hill is a major voice in the growing numbers of Mississippians who want our state flag to be changed. His stance on social media quickly made national attention as major media outlets picked up on the tweet.

In his time thus far with the Bulldogs, it did not take Hill long to make an impact, as he played all 13 games as a true freshman. He rushed for 393 yards on 78 carries and two touchdowns with four catches for 38 yards.

MSU ended up getting a nice surprise as Hill decided to return to Bulldogs for his senior season, although he may sit out if the state flag continues to fly before the season begins.

Hill has support from the NCAA, which banned championships being played in states with a Confederate emblem, expanded its policy to include regional sites that are played in women’s basketball and baseball—both which would have an effect on MSU, as the Bulldogs typically excel in baseball and have built a powerhouse program in women’s basketball.