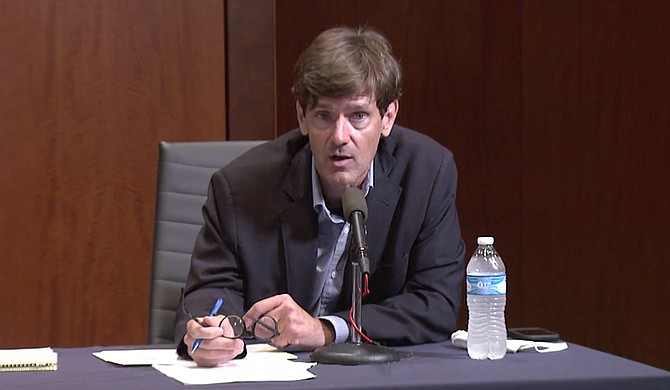 The day after a chilling interview with State Health Officer Dr. Thomas Dobbs revealed that the state is on the path to an overwhelmed health-care system, Mississippi’s hospitals reported a new peak in COVID-19 hospitalizations. Photo courtesy State of Mississippi

UPDATE: Immediately after this story went live, the Mississippi State Department of Health announced 1,092 new cases of COVID-19 were discovered yesterday, a new surge above the previous all-time peak, which came only days before.

The day after State Health Officer Dr. Thomas Dobbs warned of a looming catastrophe facing Mississippi in the fall, the state’s hospitals reported the highest incidence of confirmed and suspected COVID-19 infected patients in the hospital since the virus first arrived in Mississippi: 767 patients.

The 523 confirmed cases and 244 suspected ones are already individual peaks for the state’s hospital system, which Dobbs said will not be able to handle the load as fall approaches.

“We're seeing this sort of widespread abandonment of following (social distancing) orders. ... It's been extremely frustrating, to be quite honest. You can only do so much, but people refuse to do what can be done to prevent transmission,” Dobbs said.

“We're anticipating an absolute disaster coming into the fall because we're ramping up,” the health officer added. He forecast a near future in which Mississippians must “prepare for not being able to get into the hospital if you have a car wreck, (to) have a heart attack and there not be a ventilator to put you on.”

The same day hospitalizations peaked, Mississippi crossed a tragic milestone in the spread of coronavirus: 1,011 Mississippians have lost their lives to complications from COVID-19 since the beginning of the crisis. The Mississippi State Department of Health has not released today’s numbers as of press time.

Dobbs blamed a lack of “buy-in” from local communities for the deadly spike in COVID-19. “I was admittedly maybe a little bit naive, thinking that people would, in fact, show the restraints that we need,” Dobbs said.

Previously, the state health officer railed against dangerous and illegal gatherings in places like Oxford, where fraternity rush parties led to a cluster of infections around the University of Mississippi community.

After dealing with almost a week of an outdated system plagued by breakdown and delays, the Mississippi State Department of Health reported 526 new cases of COVID-19 yesterday. The report included 22 deaths, with 12 of those from earlier reports. Eighty-four long-term-care facilities are currently experiencing outbreaks.

In Tuesday’s interview, Dobbs said the problems that plagued the MSDH data system, known as Epi-Tracks, were not expected to cause significant delays moving forward. “We developed a workaround system where we can pull data out and analyze it and do validation algorithms to make sure that we feel comfortable that the data is accurate,” Dobbs said. A new system is forthcoming, funded by money provided to MSDH through legislative COVID grants.