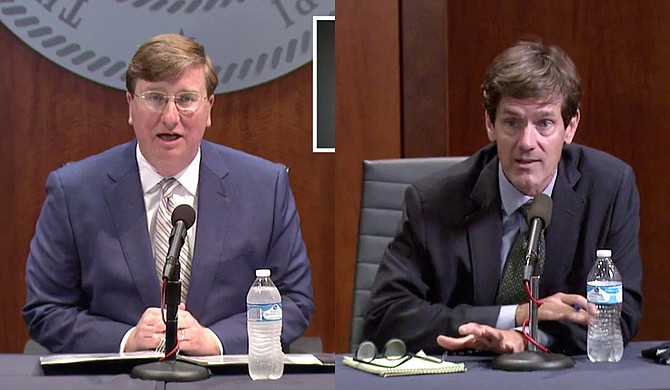 As COVID-19 continues to rapidly spread, the Mississippi State Department of Health’s data-management system is failing. Gov. Tate Reeves and State Health Officer Dr. Thomas Dobbs have reduced their public appearances at the same time. Photo by State of Mississippi

UPDATE: After press time, the Mississippi State Department of Health released COVID-19 numbers from the last five days, addressing the delays that have plagued their data system for nearly a week. MSDH reports 1646 new cases of COVID-19 since June 17. Not including the 381 new cases reported on June 17, the data averages out to 316 new cases a day, a number that shows no improvement from the increasingly high plateau seen in most of June. Additional analysis of the numbers is difficult, as the data is reported as a lump sum.

State Health Officer Dr. Thomas Dobbs apologized for the delay on Twitter, asserting that the agency has devised an "alternative process" over the weekend. MSDH has released no specifics about the state health agency's data system or the technical errors that plague it. The Jackson Free Press has reached out for additional information. The original article follows below.

The Mississippi State Department of Health is reporting a severe “data processing” issue preventing the release of new COVID-19 information that has persisted since the middle of last week, meaning the agency has not shared updated numbers on new cases and deaths since June 18. MSDH announced on Twitter today it would resolve delays by the end of the day today.

Responding to WLBT’s Courtney Ann Jackson, a spokesperson for MSDH said that “processes are in place to procure a new system,” acknowledging that MSDH’s current data system is unsuitable for the task at hand.

The most recent information on new COVID-19 cases comes from Wednesday, June 17, which showed 381 new cases and five new deaths. Data-validation issues have waylaid the updates since that report. State Health Officer Dr. Thomas Dobbs blamed the “legacy system” MSDH relies upon for reporting granular data for the delays.

The very next day, Dobbs shared his grave fears of the stress the continuing crisis puts on the state’s healthcare system, especially considering the summer was previously expected to be a respite from the disease. “The scenario is very possible that someone has a heart attack, and they’re gonna show up at a hospital, and there’s not gonna be a ventilator, because they’re all taken,” Dobbs said at a press conference on June 18.

Gov. Tate Reeves’ heretofore daily press conferences also slowed with the pace of MSDH’s updates. Last week, the governor and the state health officer addressed the public on Tuesday and Thursday—scheduling no further press conferences since.

The data problems have only worsened in the early days of the summer. MSDH’s first reported technical delay came on June 5, pushing back the release of June 4’s end-of-day cases and deaths from the morning to the afternoon. Now, at a time when state health leadership is warning of rapid community spread, and recent numbers include the highest-ever peaks and rolling averages of viral spread, Mississippi looks to wait up to a week for new information.

All of the latest information from MSDH reveals troubling trends in a variety of COVID-19-related markers. Emergency-department visit data from June 14 show a meaningful spike in respiratory disease-related visits, a statistic not seen since the earliest days of the pandemic. The fact that such visits are not expected in the hot, humid summer months makes the data even more ominous.

Spread of COVID-19 by date of onset shows a clear upward trendline into the beginning of June, where the data become preliminary. MSDH released hospitalization data through the weekend, which Dobbs has stated in the past is the agency’s number-one indicator of viral spread. Weekend data show a sharp new peak in combined cases of suspected and confirmed COVID-19 currently hospitalized in Mississippi.

The global focus on COVID-19 has receded in recent weeks, but the disease has never been stronger. On Sunday, the World Health Organization reported the biggest single-day spike in cases since the beginning of the global pandemic. More than 183,000 thousand new cases emerged worldwide, with Brazil and the United States suffering the worst increases. The state of Florida, one of the states reopening the quickest, saw more than 4,000 cases in one day on June 20, its highest daily toll to date.