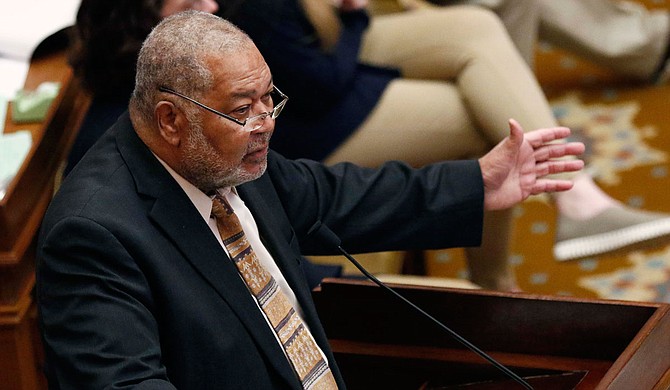 Rep. Willie Bailey, D-Greenville, speaks to the Mississippi House of Representatives to call for an end to the state’s electoral college system, which has racist roots. Photo by Rogelio V. Solis via AP

Rep. Willie Bailey, D-Greenville, rose to the podium above the Mississippi House of Representatives at the end of a long Tuesday on June 16. The topic of discussion was a resolution to do away with the state's "electoral college," adopted in 1890. The system requires candidates for statewide offices to win both the popular vote and a majority of counties in the state, a barrier erected to, in the words of Mississippi Gov. James K. Vardaman, "eliminate the n*gger from politics," much as the U.S. electoral college was adopted to appease southern slave owners.

"This whole electoral-college thing started way back after the 1890s," Bailey said. "And it was started to prevent a Black person from ever serving in a statewide position. So it was put into law for a racial reason. We don't want to apply a racial reason now."

Bailey advised caution to those unsure about their vote. The bill's intent was to change statewide elections to a simple popular vote. "Don't vote against it because you think we're taking something from the people," he said.

Not much fanfare followed.

House Speaker Philip Gunn, R-Clinton, took the tally: 141 for, 5 against. The resolution, which is expected to pass, is one small step toward the purging of systemic racism in Mississippi law.

But changes to another relic of Mississippi's past have been harder to come by. Efforts to change the Mississippi flag first appeared stalled out: Lt. Gov.  Delbert Hosemann condemned the effort to a committee, which showed no intention of calling it up. "We should've done that years ago. That flag doesn't represent anybody," Bailey told the Jackson Free Press in an interview. But his faith in a legislative solution was slim.

"Mark my words on that. They're scared. There's not gonna be change, there's gonna be lip service. They want to get out of town," he said.

As of press time, efforts to push a change to the flag through the Legislature continue. Democratic leadership held a press conference outside the Capitol building on June 23, in the fading days of the coronavirus-extended 2020 session. "Before we leave here, we'll be in a position to take a vote on the flag, up or down on some measure that will be able to get rid of the flag," the House Democratic leader, Rep. Robert Johnson III, D-Natchez, stated.

The coronavirus sent legislators home to shelter in place on March 18, delayed the session into the summer months and likely beyond, and obliterated state revenues, putting a pall over ambitious plans for funding initiatives like state employee pay raises.

A Chance For Parole

At the heart of the legislative push for criminal-justice reform is a combined bill containing many changes to the state's parole system, which legislative efforts in the "tough on crime" era of the 1990s heavily restricted.

Senate Minority Leader Derrick Simmons, D-Greenville, stressed that the parole reforms would provide the opportunity for more than half of Mississippi's 19,000 prisoners to seek parole.

The bill would create two categories for parole: in the case of nonviolent offenders, incarcerated Mississippians would be eligible for parole after serving 25% of their sentence or 10 years, whichever is less. For violent offenses, parole eligibility would begin after the individual serves 50% of the sentence or 20 years in prison, whichever is less.

The legislation, if successful, would also mandate prompt timelines for the completion of parole case plans.

The criminal-justice reform omnibus bill addresses more than parole eligibility, Simmons said. "It also addresses habitual-offender reform. It looks at ways to increase access to credit reductions for good behavior. (It) tries to guarantee that a parole eligible person has their parole hearing within a reasonable time."

House Corrections Committee Chairman Rep. Kevin Horan, D-Grenada, who authored a similar omnibus bill, is a part of the conference that is scheduled to reconcile the two bills.

The "ban the box bill," Senate Bill 2112, is also in conference. The bill would remove the presence of a prior criminal record as a "preliminary bar" to employment, giving job applicants the ability to present their credentials before employers wholesale discard them from consideration.

Senate Bill 2464 includes a provision that would increase access to the trusty program, a work program that allows inmates to earn time reductions to their sentences through good behavior. SB 2464 provides access to that program to all incarcerated Mississippians except for habitual offenders, sex offenders and those sentenced to life imprisonment.

The Mississippi Legislature plans to finish its session with reduced expectations for funding initiatives but much progress on criminal justice. Photo by Nick Judin

The session's first planned teacher pay raise, Senate Bill 2001, began as one of the top priorities of this year's legislative session. Now, it is another victim of COVID-19. The bill perished in the House Education and Appropriation committees. Its sponsor, Sen. Dennis DeBar, R-Leakesville, told the Jackson Free Press that the bill's death was the unfortunate consequence of the revenue contraction coronavirus caused.

"Obviously, it's very unfortunate that it didn't come out. ... But assuming the economy is coming back, and there are no budgetary concerns about the pay raise, I anticipate it will come back next year," the Leakesville Republican said. The Education Committee chairman insisted that better teacher pay was still a top priority for legislative leadership, including Lt. Gov. Delbert Hosemann.

Before COVID-19, a swift teacher pay raise seemed all but inevitable, with every single senator in the Legislature endorsing it. DeBar said in February and confirmed again last week that the plan for his committee was to bring forward teacher pay raises repeatedly in the term ahead, "not just in election years."

The year's many catastrophes have claimed a number of bills, some of which lawmakers previously expected to pass quickly.

The Gang Act Revision bill, Senate Bill 2459, which, if signed, would have created steep criminal penalties for "gang-related activities," died in the Judiciary B Committee on June 9, stopped dead in its tracks for the third time. In an interview with the Jackson Free Press, Judiciary B Chairman Nick Bain, R-Corinth, said the bill was "overwhelmingly" voted down in a voice vote.

SB 2459 included enhanced fines and much longer prison sentences for crimes committed in the context of a "gang," a loosely defined term that could apply to a broad range of social cliques and identifiers. And, as under federal RICO law when used against street gangs, opponents raised concerns of race-based disparities in the application of the law.

Timing and scope were the key issues that thwarted the bill's passage, Bain said. Those issues extend far beyond the present conversation over reform in the justice system. "With our corrections issues, and the pandemic ..., timing was a big issue."

The Jud B Chairman acknowledged that sponsor Brice Wiggins, R-Pascagoula, was "passionate" about the gang-law revision, as he has been as the sponsor of failed gang-bill expansions in recent years, and expressed willingness to work on the language in the future. "(We might) tighten it down or narrow it, but at this point right now, with the way it's written, I don't see it ever getting out of debate. The committee members just were not having it," Bain said.

Bain himself has a bill that hit a roadblock with the committee deadline. House Bill 1407 intended to put additional restrictions on "alternative nicotine products" including vaping products. The bill's contents included raising the age required to purchase vaping goods from 18 to 21, stiffening the penalties for selling vaping products to minors and taxation of the products on the same level as tobacco.

The question of increased taxation sunk the bill in the end, Bain said. It died in the Finance Committee in the Senate on June 9. Bain intends to use another bill to push the heightened age and the sharpened penalties this session. "I want to get it through without a tax mechanism this year," Bain said.

The Centers for Disease Control report that vaping is highly dangerous for children, listing concerns that nicotine usage can harm developing brains.