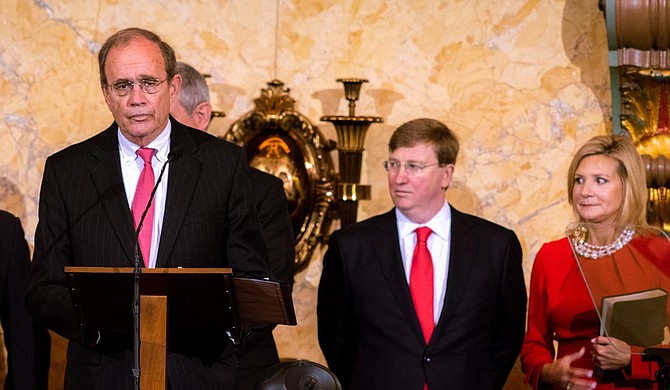 Mississippi's legislative session kicked off Jan. 7 with all the fanfare of a divine host, horns blaring and choirs singing. Beneath the pomp, however, lay a light schedule with little other than key committee appointments for the long term, which ends May 10, and lawmakers scrambling for parking spaces.

Delbert Hosemann's ascent to the lieutenant governor's seat opened the possibility for a more bipartisan Senate than in recent sessions, even as Mississippi faces its most Republican-led state government since Reconstruction—when the Republican Party was quite different. The announcement of the Senate committees on Friday, Jan. 10, buoyed those hopes with Hosemann putting several Democrats in charge of Senate committees, including those slated to take on some of the session's most critical issues.

Gangs to Prisons to Gangs

Sen. Juan Barnett, D-Heidelberg, now chairs the  Senate Corrections Committee. The appointment is a daunting task for the legislator, coming on the heels of an eruption of violence at the Mississippi State Penitentiary in Parchman. Barnett struck a cautiously optimistic tone the day of his appointment, assuring the press that he would visit not only Parchman but all the state's prisons. On Jan. 16 and 17, members of the Senate Corrections Committee visited the South Mississippi Correctional Institution in Leakesville, as well as Parchman. Barnett indicated willingness to consider private prisons as a solution to the crisis.

But it is Sen. Brice Wiggins, R-Pascagoula, who is already using the prison crisis to push specific legislation, which ironically could increase the number of gang members in the state's prisons, even though Mississippi leaders are focused on gang activity as the source of the recent prison violence."[B]y all accounts, the gangs are the problems that's created this latest incident in MDOC," Wiggins told WLBT for a Jan. 10 report on his plan to re-introduce his gang bill that has failed twice in recent sessions.

In 2018, the proposed revised language of Mississippi's Streetgang Act of 2001 included targeting anyone who "entices, solicits, coerces, encourages, or intimidates" children to engage in anything defined as "gang(s) or gang-related activities." This language is overly broad and unnecessary, criminal-justice experts say, warning that police should target actual criminal behavior inside or outside gangs rather than a mere label, which may or may not be connected to criminal behavior.

Critics of expanding the gang law to make it easier to arrest Mississippians for gang association alone, such as State Public Defender Andre de Gruy, suggested the reform would open the door to increased racial profiling. De Gruy revealed to the Jackson Free Press in 2018 that between fiscal years 2010 and 2017, law enforcement arrested only black Mississippians under present gang laws, despite evidence from the Mississippi Association of Gang Investigators that 53% of verified gang members in the state are white.

The Jackson Free Press asked the senator from Pascagoula if the language of the bill he plans to introduce will mirror his previous attempts, such as 2018's Senate Bill 2868. "It's still being worked on," Wiggins said. "Things may change, but the goal is the same: To give law enforcement the tools to investigate gangs."

Sen. Derrick Simmons, D-Greenville, opposed Wiggins' gang bill two years ago and plans to again. He pushed back in WLBT on using recent prison violence as a way to justify sending more gang identifiers to prison. "I wouldn't want to just pass legislation just because of what's going on in our correctional facilities right now, and that legislation will end up hurting us more than we already are suffering," he said, adding that expanding the gang law could mean more racial profiling. "The outcome would be increased prison population, longer prison sentences when the speculation may be false or misguided from the beginning."

The Jackson Free Press did in-depth and award-winning coverage of the first two attempts to expand the gang law. The stories are at jfp.ms/gangs.

The new vice-chairman of the Senate Education Committee, Sen. David Blount, D-Jackson, told the Jackson Free Press that he shared Hosemann's goal of exceeding the $4,300 teacher pay raise Gov. Reeves promised on the campaign trail. "Yes, we have to be ambitious," Blount said the day of his appointment.

"The goal is to attract people to the teaching profession. We want our best and brightest people to stay here in Mississippi, and we want them to consider teaching."

Reeves' plan represents a much more meaningful raise than the one now-Gov. Tate Reeves allowed to move forward last session—a $1,500 increase that failed to keep up with inflation. The proposed $4,300 raise would take effect over five years, a timescale that can leave the state's teacher pay the lowest in the nation.

But with elected leaders bragging about Mississippi's full coffers and legislators on both sides of the aisle vocally supportive of a more competitive school system, this session may be an opportunity for a significant pay increase.

Sen. David Jordan, D-Greenwood, took the plans a step further, introducing Senate Bill 2024, which would increase base teacher salary to $40,000 over four years, and thereafter peg teacher pay to the southeastern regional average. The bill now goes to the Education and Appropriations committees.

Hosemann also announced the members of an administrator advisory council as part of his campaign promise to consider the input of public educators. Nineteen school administrators from across the state staff the council, including Lori G. Torrey, principal of Spann Elementary School in Jackson.

"I look forward to working with this group and other administrators to continue advancing student achievement and supporting our schools," Hosemann said in a statement. The office of the lieutenant governor, in concert with the Senate Education Committee, will keep the advisory council apprised of legislation that concerns the state's educators. Between the 2020 and 2021 Legislative session, lawmakers will consult the council on prospective bills for the year to come.

"I applaud Lt. Governor Hosemann," Blount said. "All of us at the Capitol need to hear from the leaders who are in the schools every day."

A shocking appointment came on Wednesday, Jan. 8., when House Speaker Philip Gunn, R-Clinton, announced Rep. Karl Oliver, R-Winona, as the vice chairman of the House Appropriations Committee. In a 2017 Facebook post, Oliver called for Louisiana's state leadership to be "LYNCHED!" for their plans to remove Confederate monuments.

Members of both parties condemned Oliver for his comments, including Gunn. Oliver offered a brief apology, chalking his words up to a passion for "preserving all historical monuments." That apology seems to be sufficient for Gunn.

The House Appropriations Committee is one of the most powerful appendages of the Legislature, with its regulatory power over expenditures.

Democratic legislators expect little collegiate furor over Oliver's appointment. The influential assignment, the ones reached for this story agreed, was likely based on seniority. Any lasting anger or embarrassment over Oliver's lynching comments, it seems, lies outside the Capitol.

Sen. Lydia Chassaniol, a Republican from Winona, maintains her position as chairwoman of the Senate Tourism Committee. Chassaniol drew outrage in 2009 for giving a keynote speech to the Council of Conservative Citizens, the white-supremacist organization that later inspired Dylann Roof's church massacre, at its national convention in Jackson.

As of press day, Speaker Gunn had not announced the majority of this session's House committees. The delay is not unprecedented and is part of the first-term torpor that necessitates this year's longer legislative session.

House Conflict from the Start

One of the earliest committees cobbled together at the Legislature will determine the outcome of an election challenge stemming from House District 40, in which Democratic challenger Hester Jackson-McCray, who is black, unseated white Republican incumbent Ashley Henley.

Hester Jackson-McCray formally joined the Mississippi House of Representatives as the session opened, but a special House committee will determine the fate of her seat. Photo courtesy Desoto Democratic Party

Henley lost the district just south of Memphis in north Mississippi by a 14-vote margin, and seeks to have the Republican-led House of Representatives overturn the election. Jackson-McCray took her seat with the rest of the elected legislators as the session opened. The committee, chaired by Rep. Rob Roberson, R-Starkville, will make its recommendation, at which point the House may call for a new election or potentially seat Henley directly.

House District 40 is one of nine state elections currently subject to review. But only Henley's challenge is subject to legislative fiat: local judges will rule on the rest of last November's contested elections.

The election between Henley and Jackson-McCray focused heavily on education agendas. Much of Henley's institutional support comes from proponents of school privatization and private-school voucher advocates. Jackson-McCray ran on platforms of well-funded public school and increased teacher pay.

Of particular note is Senate Bill 2011, which amends state law to add members of the Mississippi Legislature to the list of occupations entitled to a probable-cause hearing prior to arrest for a crime committed during official duties.

Legislators would join public-school teachers, corrections officers, youth counselors and law enforcement in this privilege. For the general public, the probable-cause hearing may take place after an arrest.

The added scrutiny may prevent embarrassing and politically damaging arrests. Those not covered under the law typically have their probable-cause hearing at their arraignment, after their arrest.

Speaker Gunn created a conflict over legislator pay early in the session when he demanded four incoming legislators choose between their state pensions and their legislative salaries.

The Public Employee Retirement System changed its policy in 2019 to allow for retirees serving in the Legislature to draw their state pension as well as half of their legislative pay. But Gunn claims that PERS' decision violates state law and calls the combination pay "double dipping" from taxpayer funds. All four targeted lawmakers are Republicans.

Correction: Previously, Sen. David Blount was listed as chairman of the Senate Education Committee. Blount is vice chairman, Sen. Dennis DeBar Jr. (R-Leakesville) is the chairman. We regret the error.