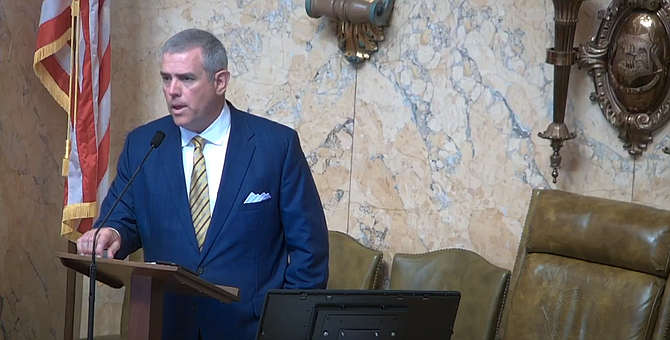 Mississippi legislators’ ambitious plans for funding initiatives like state employee and teacher pay raises have taken a backseat to dealing with the coronavirus crisis, which is obliterating both state revenues and best-laid plans for the 2020 session.

But the crisis has not prevented all bills from moving forward as the session now extends into summer months after being truncated to allow lawmakers to shelter in place. Criminal justice reform is still largely on track: with the Senate and House versions of the omnibus bills in the conference process, where legislators will iron out the various changes and amendments to their language.

The Mississippi Correctional Safety and Rehabilitation Act, Senate Bill 2123, and House Bill 1377, the corrections omnibus, are both near passage. The bills are a combined package of parole reforms that, in part, create new categories for parole eligibility. If passed, SB 2123 and HB 1377 would roll back many of the restrictions on parole eligibility established in the 1990s, which currently deny parole eligibility to around 10,000 of Mississippi’s 19,000 prisoners.

The bills, if passed, would create two categories for parole: in the case of nonviolent offenders, incarcerated Mississippians would be eligible for parole after serving 25% of their sentences or 10 years, whichever is less. For violent offenses, parole eligibility would begin after 50% of the sentence is served or 20 years in prison, whichever is less. They would also establish prompt timelines for completing parole case plans.

A “ban the box bill,” Senate Bill 2112, awaits a floor House vote. If the bill is signed into law, a prior criminal record would no longer serve as a “preliminary bar” to employment—giving job applicants the ability to present their credentials before employers discard them from consideration.

House Speaker Philip Gunn, R-Clinton, is seeking to create the “Victims of Human Trafficking and Commercial Sexual Exploitation Fund” through House Bill 1559. The Department of Finance and Administration would manage the fund to disburse funds to shelters assisting victims of human trafficking Mississippi. The fund creation would follow last’s year broad-reaching anti-sex trafficking initiative, House Bill 571, which became law. It prevents charging minors with prostitution, instead shifting criminal punishment onto the adults responsible for trafficking them.

The year’s many catastrophes have claimed a number of bills, some of which lawmakers previously expected to pass quickly.

The Gang Act Revision bill, which created steep criminal penalties for “gang-related activities,” died in the Judiciary B Committee on June 9, stopped dead in its tracks for the third time in four years. In an interview with the Jackson Free Press, Judiciary B Chairman Nick Bain, R-Corinth, said Senate Bill 2459, was “overwhelmingly” voted down in a voice vote.

Sen. Brice Wiggins, R-Pascagoula, is the sponsor of the Gang Bill that created a category of “gang activity” related crimes, which, similar to racketeering laws, target all of the individuals related to a crime by virtue of their association with the group.

Timing and scope thwarted the bill’s passage, Bain said. Those issues extend far beyond the present conversation over police overreach and brutality in the criminal justice system. “With our corrections issues, and the pandemic … timing was a big issue.”

Wiggins was “passionate” about the gang-law revision, and expressed willingness to work on the language in the future, Bain said. “(We might) tighten it down or narrow it, but at this point right now, with the way it’s written, I don’t see it ever getting out of debate. The committee members just were not having it,” he said.

Bain’s bill to further restrict “alternative nicotine products,” including vaping products, also hit a roadblock. House Bill 1407 sought to raise the age required to purchase vaping goods from 18 to 21, stiffen the penalties for selling vaping products to minors and tax the products on the same level as tobacco.

The question of increased taxation that sunk the bill in the end, Bain said. It died in the Finance Committee in the Senate on June 9. Bain intends to use another bill to push the heightened age and the sharpened penalties this session. “I want to get it through without a tax mechanism this year,” Bain said.

A teacher pay raise and one of the top priorities of this year’s legislative session is a significant victim of COVID-19. Senate Bill 2001, perished in the House Education and Appropriation committees. Its sponsor, Dennis DeBar, told the Jackson Free Press that the bill’s death was the unfortunate consequence of the revenue contraction due to coronavirus.

“Obviously, it's very unfortunate that it didn't come out. ... But assuming the economy is coming back, and there are no budgetary concerns about the pay raise, I anticipate it will come back next year,” DeBar said. The House Education Committee chairman insisted that better teacher pay was still a top priority for legislative leadership, including Lt. Gov. Delbert Hosemann.

Before COVID-19, a swift teacher pay raise seemed all but inevitable, with every senator endorsing it. DeBar said in February and confirmed again today that the plan for his committee was to bring forward teacher pay raises repeatedly in the term ahead, “not just in election years.”